photo: Morrissey at MSG in June (more by P Squared) 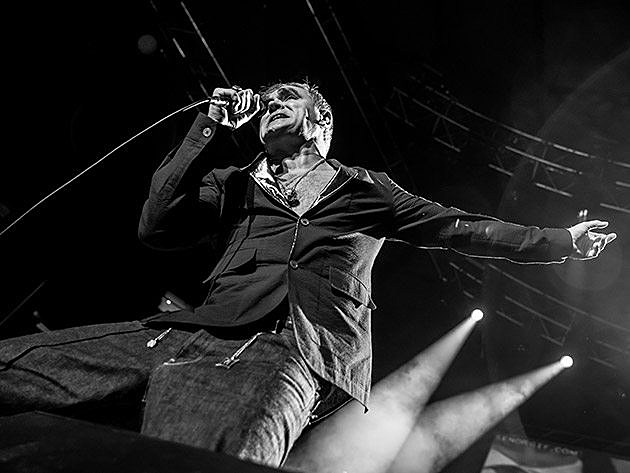 Thom Yorke and Morrissey, while pretty indisputably great British artists, also have a shared tendency to get cranky and then say things. Yorke, in his ongoing war of words with various streaming services, recently compared Youtube to Nazi Germany in an interview with the Italian newspaper La Repubblica.

They're making money with the work of loads of artists who don't get any benefit from it. People continue to say that this is an era where music is free, cinema is free. It's not true. The creators of services make money -- Google, YouTube. A huge amount of money, by trawling, like in the sea -- they take everything there is. 'Oh, sorry, was that yours? Now it's ours. No, no, we're joking -- it's still yours.' They've seized control of it -- it's like what the Nazis did during the second world war. Actually, it's like what everyone was doing during the war, even the English -- stealing the art of other countries. What difference is there?

Morrissey, whose big mouth has struck before, recently compared the TSA at the San Francisco airport, who he claims sexually assaulted him while he was trying to get through security, to ISIS. In a blog post on a Moz mouthpiece True To You he wrote:

TSA have ignored my official and legal and constitutional complaint. From this we gather that TSA stands for Thorough Sexual Assault. If you are traveling through San Francisco International Airport you must be ready for a full sexual attack by people who claim to have your interests at heart. It is unlikely that ISIS would stoop so low.

In other Morrisey news, he was recently given an award for "Bad Sex In Fiction" by the Literary Review for his recent novel List of the Lost. Morrissey beat out several other finalists, including The Wire scribe George Pelecanos, with the following doozy of a sentence...which we've quoted before, but why not go back to the well:

At this, Eliza and Ezra rolled together into the one giggling snowball of full-figured copulation, screaming and shouting as they playfully bit and pulled at each other in a dangerous and clamorous rollercoaster coil of sexually violent rotation with Eliza's breasts barrel-rolled across Ezra's howling mouth and the pained frenzy of his bulbous salutation extenuating his excitement as it whacked and smacked its way into every muscle of Eliza's body except for the otherwise central zone.

We'll leave it at that.