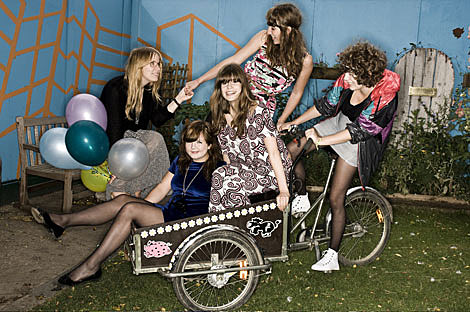 Stockholm, Sweden's all-girl quintet Those Dancing Days are coming to America for the first time next month, including two dates in NYC: Mercury Lounge on May 26 and Union Hall on May 28.

Formed in 2006, the band (who are still in their teens, just barely) released an EP this time last year that got a fair amount of internet attention, and their full-length debut, In Our Space Hero Suits, was released last year in the UK on Wichita Records (Los Campesinos!, Peter Bjorn and John, Sky Larkin). Here's what the NME said about it:

God bless the humble handclap. Pop would be bereft without it. What do you get when you soul-shuffle it with the Wigan Casino, a Phil Spector wig and five mini-skirted Swedes? Whack in a dizzying Hammond organ and you've got the kind of sherbet-pop that promises to get all the girls hip-swaying on the dancefloor (because getting girls on the dancefloor is what pop's all about). Hailing from the Stockholm suburb of Nacka, it's no surprise this sashaying quintet originate from the land of Abba. What is a surprise is their love affair with both northern soul and '60s girl groups. Put them together and you have a kaleidoscopic mash-up only the Nordic could attempt to get away with.

Check out a couple Those Dancing Days videos at the bottom of this post.

May in New York is going to be lousy with Swedes, a Scandinavian invasion the likes of which this town hasn't seen since IKEA opened in Red Hook. As promised, Suburban Kids with Biblical Names are coming. They were added to the NYC Popfest line-up (which already features Swedes The Radio Dept and Lichtenstien), playing the Sunday (5/17) day-long show at Cake Shop. Advance tickets to that one show have sold out, but there will be some available at the door on the day of the show. And as mentioned before, Pelle Carlberg is playing Union Hall on May 30.