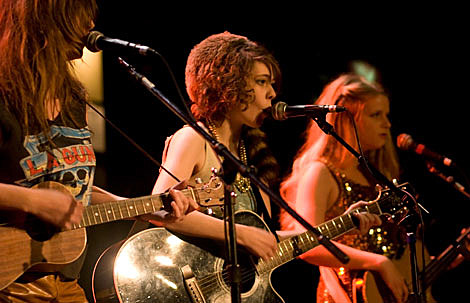 Aside from their apparent taste for fur (that hat?) (and maybe an old jacket?), and the occasional less-than-steller instrumentation and/or singing (it's not always about perfect playing), there's no denying (I'm asking for it with that one) that Those Darlins are an entertaining band. Last night (1/15) at Mercury Lounge, the crowd (myself included) seemed to be enjoying the young trio+drummer's country tunes - they were the perfect way to warm everyone up for Norway's Ida Maria who came up, and tore the place up, next.

Show bookers seem to already know this about Those Darlins. If you haven't noticed, much like the Vivian Girls, this mostly-female band is suddenly appearing on every other (alt-country) bill. To name a few... they've recently played with O'Death, Heartless Bastards, Langhorne Slim, Deer Tick, Boss Hog, and have an upcoming tour scheduled with Dan Auerbach of the Black Keys (which has them back at Bowery and Music Hall). Last night they opened for Ida Maria at Mercury Lounge, and TONIGHT (1/16) they play with The Soft Pack (formerly the Muslims) and the Browns at Mercury Lounge (again). Saturday night they play their 3rd NYC show in a row (they're from Tennessee) at Union Pool (also with The Soft Pack).

Check out some of TD's recorded songs at MySpace. All tour dates below....