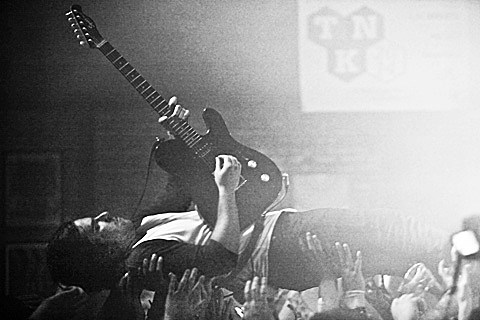 We mentioned back in December that two Nashville bands, Those Darlins and Diarrhea Planet, were planning to tour together this year. The dates have since been announced in full, and that tour kicks off this weekend, bringing the two bands to NYC on Sunday (2/16) at Music Hall of Williamsburg with Desert Sharks. Tickets for that show are still available, and we're also giving away a pair. Details on how to enter to win, along with the updated list of dates, below.

We just caught Diarrhea Planet in Chicago with Yuck and Pink Frost during Tomorrow Never Knows. You can check out more pics from that (like the one above) at BV Chicago. After the tour with Those Darlins, DP have a few festival appearances lined up, including Alabama's Hangout Fest and a return to NYC for Governors Ball in June.

Those Darlins, who also play Savannah Stopover and SXSW, recently released a new track from the sessions of their 2013 LP, Blur the Line, titled "Why Can't I." You can stream that song below, along with a recent video of the band playing "That Man" for Nashville Cream's "Live in the Morgue" series.

All dates are listed, along with streams and contest details, below...

Those Darlins - "That Man" Live in the Morgue