It's been another dark week in America, with the confirmation of Amy Coney Barrett to the Supreme Court, and with Election Day just around the corner, anxieties are very high right now. Remember to vote (for Biden/Harris and the Democratic party) if you haven't already, and if you're feeling helpless because of Barrett's views on abortion, consider donating to an abortion fund in the states with little or no abortion access. Also consider donating to the GoFundMe for the family of Walter Wallace Jr, the 27-year-old newlywed husband and father who was shot and killed by police in Philadelphia this week.

Read on for my nine picks. What's your favorite release of the week?

Emma Ruth Rundle & Thou - May Our Chambers Be Full
Sacred Bones

The best collaborations happen when two or more artists come together and don't just combine their individual talents, but feed off each other in a way where they create something none of them could have done on their own. That's exactly what Emma Ruth Rundle and Thou have done on their new collaborative album May Our Chambers Be Full. Emma is a dark singer/songwriter from Louisville with a truly soaring voice; her music is metal-friendly but not metal. Thou are a crushingly heavy sludge metal band from Baton Rouge who are obsessed with grunge but only rarely embrace grunge's melodic side. Both of them have released a handful of great albums, but nothing they've released on their own is as rich and expansive as May Our Chambers Be Full. Emma and Thou's respective approaches to music latch together like puzzle pieces on this album. Emma's metal adjacency makes Thou a perfect band to add a little more weight to her music, and Thou's flirtations with melody and atmosphere allow Emma to immediately assimilate into their world. It's an album that feels heavy and soft, melodic and discordant, all at the same time. It's approachable enough for rock fans and it won't turn off metalheads either. It doesn't feel like a "side project"; it feels like some of the most exciting guitar-based music released this year.

Since forming a decade ago, War On Women have continued to make a case for themselves as one of the best punk bands around. Shawna Potter's soaring voice could fill arenas but she keeps it raw and aggressive enough for basement punk shows, and it clashes perfectly with guitarist Brooks Harlan's ability to bring a punk mentality to scorching metal riffs. Their music's as heavy as it is catchy, and they use it to deliver powerful social/political messages, resulting in albums like 2018's Capture The Flag, which is already a classic of the Trump era. But to paraphrase a song from that album, it doesn't really matter who's in office; there are always fights to be fought and War On Women are the kind of band who will always be on the front lines. That continues with their third album Wonderful Hell, which takes aim at police brutality, mistreatment of indigenous peoples and immigrants, the sexism faced by female politicians, and a slew of other injustices, and there's a song that seems like it was written recently enough to be about the lies Trump spread about coronavirus ("Seeds"). (If it wasn't written in response to that, then it's very prophetic.) As ever, Shawna's words hit hard, and War On Women's music is so compelling that it doesn't take long for their messages to lodge themselves in your brain. A great punk album isn't enough to change the world on its own, but it can get you fired up enough to go out and do so. So let's take a note from this album and go out and raise some wonderful, beautiful hell.

WizKid - Made In Lagos
Starboy/Sony/RCA

Nigerian Afrobeats star WizKid has followed 2017's great Sounds from the Other Side with his anticipated new album Made In Lagos, which is dedicated to the citizens of Nigeria in the midst of the #EndSARS movement in protest of the country's police brutality (which WizKid has been very vocally involved in). "It has been beautiful to see Nigerians around the world coming together to protest against police brutality," he said, along with this album's release. "Unity is key. The youth of Nigeria need our collective voices to continue to shine a spotlight to what is happening inside the country. I want to play my part in this and in the movement for a better Nigeria, a better place to live for ourselves, our families - our communities. We will get through this together. Together we move. #endSARS."

Made In Lagos has a stacked selection of guests including Burna Boy, Skepta, Damian Marley, H.E.R., Ella Mai, and recent Starboy signee Terri, and as you may expect from a cast like that, the album is fueled by a fusion of sounds that find the common ground between UK hip hop, Jamaican reggae, American R&B, and the music of WizKid's home country. It's an overall mellower album than Sounds from the Other Side and it finds WizKid continuing to explore new musical territory. Having already appeared on a No. 1 Drake hit ("One Dance") and a Beyonce album (The Lion King: The Gift), WizKid could easily settle into his role as an international superstar and coast on past successes, but judging by Made In Lagos, he's still growing creatively and not watering anything down for mainstream acceptance.

Mike Patton is a natural-born punk frontman. He may be best known for wacky alt-metal, art rock, and all kinds of impossible-to-pigeonhole stuff, but he kills it when it comes to gnarly, fast, straight-ahead punk. He reminded the world of this with his recent punk supergroup Dead Cross, and then again when Mr. Bungle reunited for their first tour in 20 years. At those shows, they didn't play any of Bungle's best-known songs. Instead, Patton, Trevor Dunn, and Trey Spruance broke out the songs from their 1986 hardcore/thrash demo The Raging Wrath of The Easter Bunny -- which is almost nothing like the music Bungle got famous for -- for the first time in over thirty years. To help them out, they tapped two legendary musicians who influenced that demo: former Slayer drummer Dave Lombardo (who's also in Dead Cross) and Anthrax guitarist Scott Ian. "To have Scott and Dave with us on this suicide mission is more than an honor," Mike Patton said when the tour was announced. "THEY are a big part of the reason we wrote this stuff in the first place, and to realize it 30+ years later with these maestros is an absolute miracle… we can finally play this teenage nonsense correctly! A total catharsis for us."

Along with those Easter Bunny songs, the new and improved Mr. Bungle lineup also played a handful of punk/thrash covers, including "Habla Español O Muere" (a rework of the controversial "Speak English or Die" by Scott Ian's band Stormtroopers of Death) and Corrosion of Conformity's "Loss For Words," and then Mr. Bungle hit the studio to record the Easter Bunny songs and those two covers for The Raging Wrath Of The Easter Bunny Demo. "Recording THIS music with THESE guys was an enormous head-rush of virtuosity and surprises every day in the studio," Mike said. Sometimes re-recording old material is an admission that the creative spark is gone, but that's not the case for this album. The demo versions of these songs don't sound very good, and they never really got their proper due, as Bungle ended up getting famous for such different material. This album finally gives these songs the proper treatment they've always deserved, and the members sound as inspired as ever on these recordings. Easter Bunny is just a great punk/thrash/crossover record, period. And the fact that they were able to record it with perhaps the greatest thrash drummer ever is the icing on the cake.

In 2013, death metal legends Carcass put out their first album since the '90s, Surgical Steel, and it was the rare comeback album that was every bit as good as their classic material. Seven years later, it topped Decibel's list of the 100 best metal albums of the 2010s and it came in at #2 at MetalSucks. Carcass were supposed to finally follow it with a new album this year, but then the pandemic hit and they decided to delay the album indefinitely. Still no word on when it'll come out, but meanwhile, they decided to tide us over with this four-song EP. As Surgical Steel did seven years ago, these four songs prove that Carcass have very much still got it. They're all masterclasses in top tier death metal -- clear and precise without toning down the band's raw attack, melodic and tuneful without letting up on the abrasion. More simply put, every song just rips. I don't know what else you can ask for from a band with a back catalog as solid as this one.

Elucid is already one half of one of the year's best rap records (Shrines by Armand Hammer, his duo with billy woods), and now he's releasing the debut album by another duo he's part of, Small Bills with Detroit multi-instrumentalist/producer The Lasso. billy woods appears on this too, as do Shrines contributors Moor Mother, Fielded, and Nosaj, as well as .k and Koncept Jackson. Like Armand Hammer, Small Bills often recalls the classic early 2000s Def Jux era, but they bring new perspective to the table and make it their own. And though Small Bills may have some sonic similarities to Armand Hammer and a handful of the same cast members, this album is also a beast of its own. It's overall more psychedelic and more chaotic. It has less warm, soulful production than Shrines and more sputtering electronics. The two albums go well together, and if you're one of the many people that've been hooked on Shrines this year, you need to make sure you add Don't Play It Straight to your rotation. 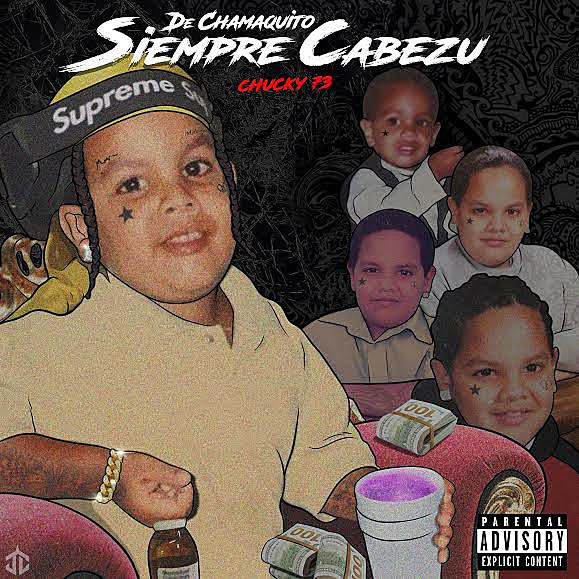 If you live in New York, you're bound to hear cars driving by blasting the sounds of Latin trap and others blasting Brooklyn drill, so it was only a matter of time before a group would come along who would blend those sounds seamlessly. That group is Sie7etre3, a label/collective of rappers led by the Dominican-born, Bronx-based Chucky73, who follows his collaborative EP with Fetti031 with his debut full-length today. Fetti031's featured on this album too, as are Latin trap stars Myke Towers and Nio Garcia, and these 12 songs make good on the promise of that EP from earlier this year. Like on the EP, the Latin trap influence is undeniable but the sounds of Chucky's home city make this darker, harder-hitting music than, say, Bad Bunny or Ozuna. Chucky makes the fusion of sounds feel so natural that it feels less like two subgenres coming together and more like the creation of one new subgenre. If De Chiquito Siempre Cabezu has a shortcoming, it's that the songs can start to all kind of sound the same, but that sound is so appealing and original, that it's hard to feel anything other than excitement.

Lyric Jones - Closer Than They Appear

Anti-Flag released 20/20 Vision back in January, and it's become one of the year's most prophetic albums (and one of the year's best punk albums). Now they put out a deluxe edition called 20/20 Division, with five new and unreleased tracks. The new tracks are all just as essential as everything on the original album, and they remind you that this is a band who just do not slow down or give up. Read more here.