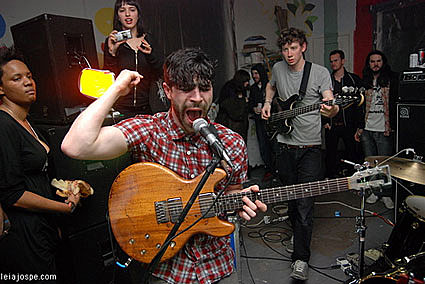 Foals tour manager Nick Jenkin today called Lydon's description of the event at Barcelona's Summercase Festival "totally untrue," and said he watched Okereke being punched by the Sex Pistols' entourage while the band's frontman, known as Johnny Rotten, taunted the Kaiser Chiefs' Ricky Wilson, after he went to the aid of the Bloc Party singer.

Jenkin also told Times Online that Foals frontman Yannis Philippakis tried to help Okereke but was put in a sleeper hold by a security guard until he passed out and was then handcuffed as he lay on the ground. "He had a boot on his back," Jenkin said.

Gruff Rhys was there too.