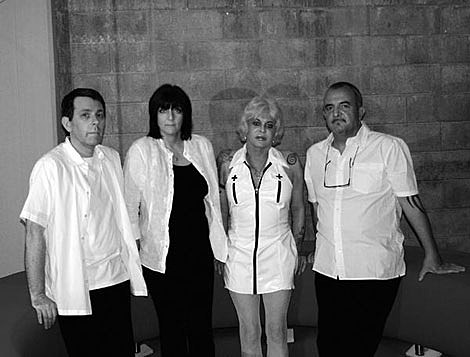 Throbbing Gristle announce their first US performances in 28 years - including an appearance Sunday April 19th at the 2009 Coachella Music Festival! The band, who have not performed in the United States since 1981, will also be playing Chicago and New York for the first time ever.

To mark these special occasions, Throbbing Gristle will play TWO SET events in New York and Chicago. The performances begin with a new live soundtrack to Derek Jarman's 60-minute 1980 alchemical film "In The Shadow Of The Sun" followed by a second set of material from across Throbbing Gristle's history.

Throbbing Gristle will be available for a fan signing session between sets in both New York and Chicago. Fans are encouraged to bring along one item from their collection for the band to sign. There will also be special 'TG USA 2009' merchandise including an all new album, t-shirt specific to the event, tour enamel badge, and tour embroidered patch for sale.

In addition, Throbbing Gristle will perform their live soundtrack to Derek Jarman's 60-minute 1980 alchemical film "In The Shadow Of The Sun" at UCLA in Los Angeles on April 21st and a full set of material from across their history at The Grand Regency Ballroom in San Francisco on April 23rd.

Throbbing Gristle - Chris Carter, Peter Christopherson, Genesis Breyer-P.Orridge and Cosey Fanni Tutti - formed in 1975 and released a string of albums until 1981, including The Second Annual Report, 20 Jazz Funk Greats and the legendary 24 Hours Cassette Boxed Set (reissued as TG24 on CD by the Grey Area of Mute in 2002 and followed by the companion box set TG+ in 2004). Unlike many of their punk peers, Throbbing Gristle deployed their music as a weapon attacking the apparatus of the music industry, which they treated as the propaganda wing of the then growing entertainment industry. TG set up their own imprint, Industrial Records (giving rise to the term "industrial music"), for the distribution of their clanging factory noises and as a cold parody of the entertainment industry's process of industrializing music.

In 2007 Throbbing Gristle released their first new studio album in over 25 years, Part Two - The Endless Not which was followed later that year by TGV, a live DVD box set featuring 10 full shows - most never-before-seen - ranging from the fascinating beginnings in 1979 through to the notorious RE~TG 're-grouping' 23 years later at London's Astoria and three further European shows.

2008 saw the reactivation of Industrial Records and the release of Thirty-Second Annual Report, a reinterpretation of The Second Annual Report recorded at La Villette in Paris, 30 years after its original release and available on download and as a special edition vinyl, pre-framed and limited to 777 copies.

Tickets for the NYC show are going to sell out. All dates below...