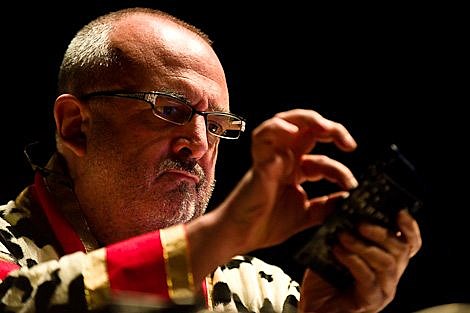 Negative reports from Throbbing Gristle's sold out Brooklyn Masonic Temple gig the night before were creating an expectation of cynical non-communication and lazy noisemongering, but the long-lost English quartet's Friday appearance at (le) Poisson Rouge was surprisingly direct, targeted with precision and offered no messing about whatsoever. Formed in 1975, their last Stateside performance was back in 1981, after which they disbanded until 2004. This current cluster of gigs mark their first ever appearances in NYC. Even though the Throbs take to the stage an hour later than promised (well, according to the club's website, but not their own), once ensconced, the foursome set about pummelling the crowded (but not overcrowded) space with an onslaught of completely uncompromising industrial ramming. 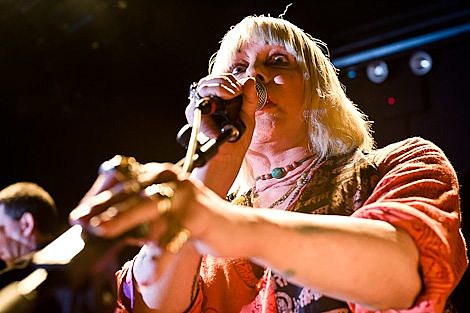 The blonde-tressed Genesis P. Orridge is the punk Marianne Faithfull, mainly concentrating on his/her deadpan intonations, but occasionally making an overloaded racket on the violin. Peter Christopherson and Chris Carter hunch over the computers, their table littered with manual devices, allowing plenty of hands-on sample triggering. Cosey Fanni Tutti is mainly playing slide guitar, adding acidic decorations to the brutal electro-hammering, and briefly turning to her cornet. The set is roughly divided between songs and instrumental grooves, opening with "Very Friendly" (the first song that they ever wrote together, thirty-four years ago, Orridge marvels), soon followed by "Hamburger Lady". It's the bangin' instrumental work-outs that attain the highest peaks of frenzy, though, filtered and fed back through the techno and breakbeat experience, hung around hard bassy granite, and trimmed with violent distortion, gradually increasing the volume curve up to massive. The club's sound balance is excellent, delivering all the loving details of Gristle's grit. There's more jocularity onstage than expected: amidst the sinister threat and diseased vibrations. Orridge and Tutti are frequently caught having a giggle, before weighing into the next evil riff. Instead of being mysterious legends who disappoint, Throbbing Gristle are now performing with a vital, energised edge, repeatedly switching the emphasis from narrative song to twitchily danceable pulse-repetitions. 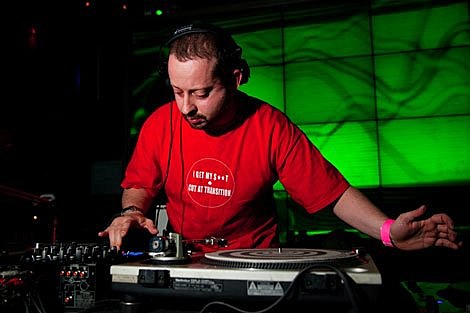 Half an hour later, Kode9 is representing the newer generation of British electronica at the American Museum Of Natural History's One Step Beyond night. The setting is immediately underneath the museum's impressive cosmic planetarium sphere, the crowd promenading down its surrounding spiral pathway to the dancefloor below.These Friday night sessions perch between mainstream partying and left-side dance beats, so Kode9's DJ-ing is not as extreme as expected, not offering up the hardcore dubstep sounds that were doubtless in evidence the previous night at his Love show. Perhaps surprisingly, it's LA's Flying Lotus who wins out in the extremity stakes, proceeding to deliver a shorter set of wrenched beats and side-shunting time signatures, grabbing the dancefloor's peak momentum just as the witching hour passes.

Video from Throbbing Gristle's set at Coachella on Sunday, below...