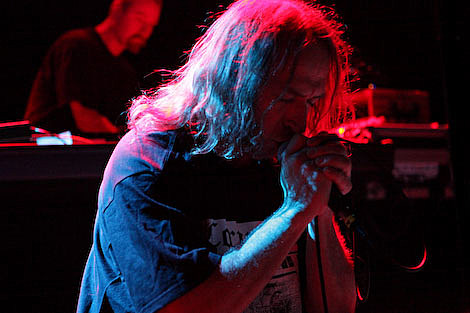 Thrones, aka Joe Preston, is confirmed for an NYC show on Feb 19th at The Stone. No word if the show is part of a greater East Coast tour. Joe Preston's first and only LP as Thrones, A Day Late And A Dollar Short, was released in 2005 on Southern Lord.

Thrones shared the stage with Bastard Noise last year during night one of No Fun Fest at MHOW (day 2 pics). That band is currently putting the finishing touches on a new full length entitled A Culture of Monsters, has a new split LP entitled The Red List out on CD via 20 Buck Spin and vinyl Deep Six Records, sharing billing with the unrelenting powerviolence of The Endless Blockade. Download the new Bastard Noise track "Mutant World Of Shame / Underworld" above.

The Endless Blockade contribute ONE 14+ minute track (not fourteen one minute tracks), "Deuteronomy", as well as a pair of remixes from their Primitive LP by Noah Creshevsky and The Rita. The Canadian band is also prepping a split with Unearthly Trance, a new 12" EP, a discography CD, and a record with side project Slaughter Strike. They also have some planned dates with the great Hatred Surge in Texas, including an appearance at SXSW....

We can now also announce that 20 Buck Spin will participate in South By Southwest in Austin, Texas this year between March 17th and 21st. We will have an official showcase that we will split with the incomparable Profound Lore label. Each label will offer three of its bands. 20 Buck Spin will showcase The Endless Blockade, Liturgy and White Mice

More on THAT kick ass showcase to come, as date/venue/other pertinent details are still are TBA. Meanwhile, look out for two of those 20 Buck Spin bands, Liturgy and White Mice, to team up in NYC on 1/15.

Both The Endless Blockade and Hatred Surge separately played two of my favorite shows of last year.

Current Thrones and Endless Blockade dates are below, as well as a few videos...