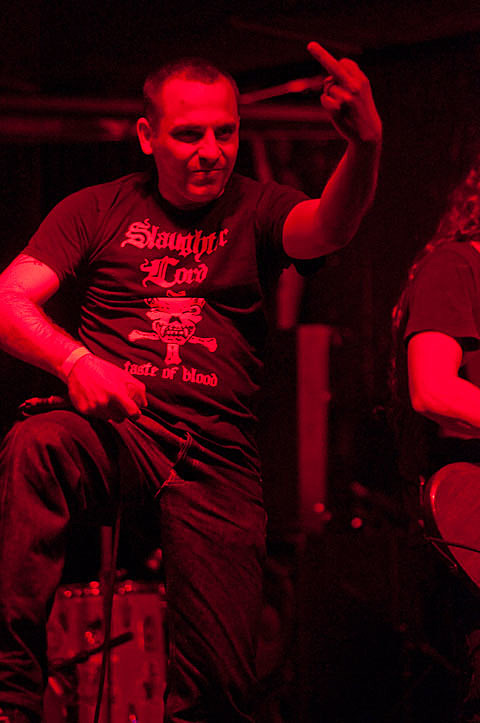 Joe Preston and his solo project Thrones returns to NYC tonight (10/13), as part of a larger tour with Christian Mistress. The duo will team up with Villains to tear down Acheron at 9pm (a joint BrooklynVegan & Todd P production). $10 gets you in.

In other news, though Joe Preston hasn't recently logged any time at the studio, he has a an LP on the way from when he served time as a member of Earth:

Order that record now via Southern Lord. More details on a new Earth record are on the way, though Joe Preston won't be involved in that record which should surface next year.

Tonight's show is one of many Todd P and BrooklynVegan presented shows in the next few days. Thursday will see Todd P present Silk Flowers and CNTRL TOP (mem These Are Powers) along with an art exhibition, prints and film at Elizabeth Foundation For The Arts (323 W 39th St #3 @ 9th Ave in Manhattan) starting at 6PM. Friday (10/15) Todd P will bring Lightning Bolt, Dan Deacon Ensemble, special guests Otouto and the last NYC appearance from Casiotone for The Painfully Alone to the Ridgewood Masonic Temple. Advance tickets may still be available at Desert Island Books (540 Metropolitan Ave).

Desert Island Books also has your $10 tickets (while they last) for the Todd P-presented A Place to Bury Strangers, Japanadroids, Justin Wong, and Grooms show happening at Death By Audio on 10/26. Ticketfly has your tickets for the Japandroids show at Maxwell's.

Speaking of tickets, want to win tickets to Thrones, Lightning Bolt, Rosetta, or The Gates of Slumber? I have a pair of tickets available for giveaway for EACH. Details on how to win, as well as some videos are at the bottom of this post... (And this concludes the first ever post to incorporate both The Gates of Slumber AND Dan Deacon).

DEATH DEALER -- THE GATES OF SLUMBER

Want a free pair of tickets to either Thrones, Lightning Bolt, Rosetta, or Gates of Slumber? Email BVCONTESTS@HOTMAIL.COM (subject: Lightning Bolt) with your show preference and first/last name in the body of the email. Include your first and last name. Must be 21+ for Union Pool shows. Winners will be picked at random and contacted with more information. Good luck!