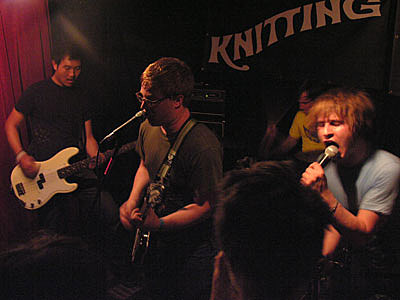 Above photo of Thunderbirds are Now! from the Knitting Factory show on May 12th. I posted three more pictures that night. Here are some reviews from across the Internet...

"Okay so these guys were fucking awesome, really good live show, because they play like its the last song for every song"
- Thunderbirds Are Now! 05/12/05 The Knit

"Before an audience that could not have been over 50 heads, TAN! plied open our mouths and shoved down ear-splitting hooks, well-placed synth beeps and blips, and one of the most entertaining stage shows I’ve seen at the Ottobar."
- Thunderbirds Are Now! at the Ottobar | 5.14.2005

"All of the guys in the band go nuts, but the keyboardist / vocalist Scott Allen goes completely bonkers. He went into the crowd a few times and did the spastic dance against the crowd. It was awesome."
- Thunderbirds Are Now! My Ears Are Shot! (with video)

"They’ll probably play in a larger place, to more people, then. Tonight though, they’ve managed to remind me what live music should be, to make me feel that Music itself is doing just fine, and I can’t wait for more people to feel this way."
- Supermarionation (Thunderbirds Are Now!, Knitting Factory Old Office)