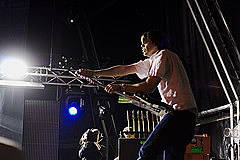 Tickets are now on pre-sale for a bunch of Thurston Moore solo dates that include a September 24th show at Maxwell's in Hoboken, and one two days later at the Music Hall of Williamsburg in Brooklyn. Thurston's new album, Trees Outside The Academy, is in stores September 18, 2007 on (his own) Ecstatic Peace Records.

It’s Thurston’s first solo outing since 1995’s Psychic Hearts. Of course, Thurston’s been releasing records here, there and everywhere mostly in the context of rowdy and rambunctious noise/improv escapades but this new one is killer diller SONGS! Unlike Psychic Hearts’ skeletal trio rock, this new jammer, 12 years post, has a far fuller bouquet of sonic depth and proves this Sonic dude to have a very real songwriting life outside of the legendary Sonic Youth (of which he is a founding figure, duh).

This newborn disc is 12 songs long. Thurston recorded primarily on acoustic guitar and bass, laying down the core of the tunes with drummer compatriot Sonic Youth’s Steve Shelly and violinist Samara Lubelski, a noted player from MV/EE and The Golden Road, Hall of Fame and other awesome gatherings as well as solo artiste.

"Thurston Moore is pleased to announce his upcoming “Trees Outside The Academy Tour” with special guests on select dates Christina Carter and Scorces!"