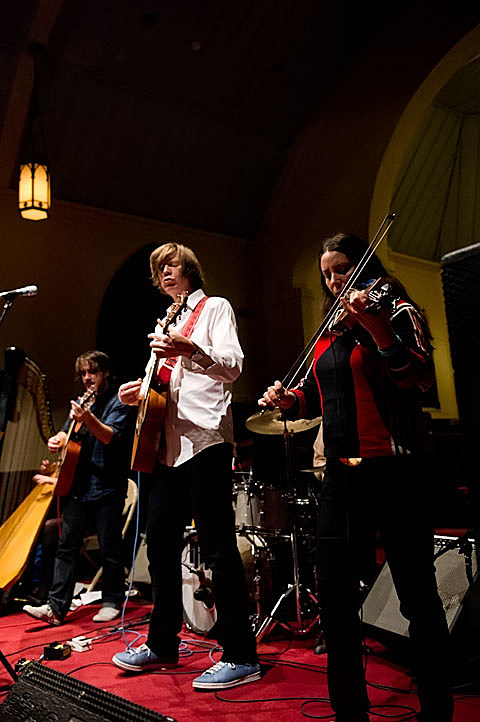 As you may have seen on BV Austin (and above), Thurston Moore brought his current tour to Austin last week and played sold out show at St. David's Church, not long after his NYC show at the Allen Room as part of the American Songbook Series (that Tune-Yards and Bill Callahan also played)...

"Why can't we play facing this way?" Thurston Moore asked during his February 2nd acoustic, solo concert at New York's Allen Room, turning from the audience and gazing through the floor-to-ceiling glass behind his band. In fact, he did. Halfway through "Ono Soul," from his 1995 album Psychic Hearts, the Sonic Youth guitarist swung around toward the winter's-night view across Central Park, holding his instrument over his head, then aiming it at his small amp like a divining rod, drawing out a broad drone of distortion." [Rolling Stone]

Watch a video from the NYC show below (of Thurston playing and reciting poetry), and check out the pictures from Austin.

Thurston's band included Samara Lubelski on violin, and that's who will be playing with him next Thursday (2/23) at Issue Project Room in Brooklyn as part of a poetry event called "Littoral: Flowers & Cream" and along with sets (or poetry?) by Anselm Berrigan, John Coletti, and Ben Estes & Elaine Kahn. Admission is FREE, but you need a ticket.

Speaking of churches in Austin, Pitchfork announced their SXSW showcase.