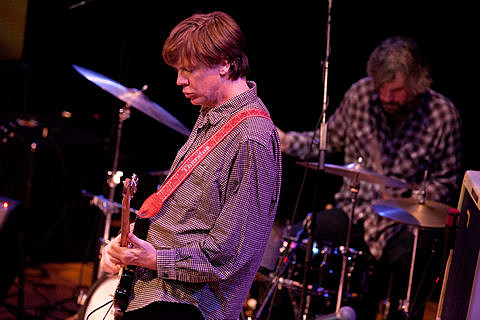 Thurston Moore and his Chelsea Light Moving bandmate John Moloney, who released the collaborative Caught On Tape earlier this year, are teaming up for a NYC show at Union Pool on December 11 with Speedy Ortiz and Lone Wolf (aka Ryan Sawyer, who also appears at Union Pool a few days earlier with Yeah Yeah Yeahs for a Sandy benefit). Admission is $10 at the door.

For Northampton's Speedy Ortiz, the show is part of a short December tour which also includes another Brooklyn show happening on December 13 at Shea Stadium with Grooms, Lushes, and Eartheater. After that tour, they plan to head out with Roomrunner in January but the dates for that tour have not been announced yet. Roomrunner meanwhile open for Future of the Left at Knitting Factory tonight (11/27).

As mentioned, Thurston Moore's ex-Sonic Youth bandmate/wife Kim Gordon will appear at the Dinosaur Jr. You're Living All Over Me show at Terminal 5 (12/1), along with Al Cisneros (Om, Sleep) and Johnny Marr. Kurt Vile opens the show and tickets are still available.

A list of all Speedy Ortiz dates and an excerpt of Thurston & John's Caught On Tape release, below...