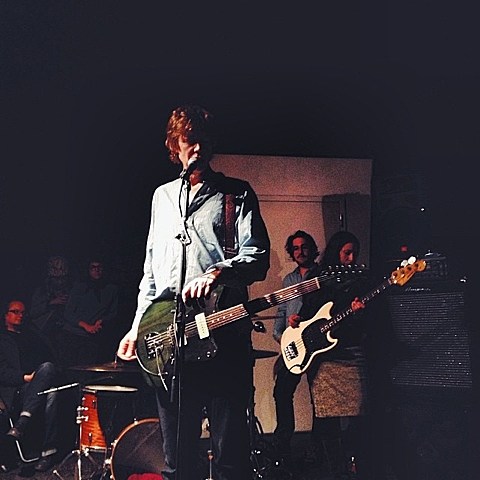 When the brilliant guitarist Joe Morris, a late addition to the bill, joined the duo, the music turned elegantly introspective. Mr. Morris's single notes intertwined with Mr. Zorn's playing as Mr. Moore cast deep sonic backdrops. Occasionally the three men turned up the dissonance, but the major takeaway from the hourlong set was of complex, wistful music that could transform into something else at moment's notice. [Wall Street Journal]

Thuston Moore rang in the new year by kicking off his residency at The Stone (which goes through Sunday, 1/5) with two shows on New Year's Eve. The first show, which the above review is from, was a collaborative set from Thurston Moore and John Zorn, that also included late addition Joe Morris, and actually started earlier than its planned 8 PM start time, being that the venue was already filled to capacity. Then for the second show, Thurston played a collaborative set with Mike Watt (The Minutemen/fIREHOSE) and Raymond Pettibon, followed by a set by his current band Chelsea Light Moving (pictured above).

The residency continues with his CLM bandmate Samara Lubelski and others tonight (1/2), his Sonic Youth bandmate Steve Shelley on 1/3, SY bandmate Lee Ranaldo on 1/4, and White Out on 1/5.