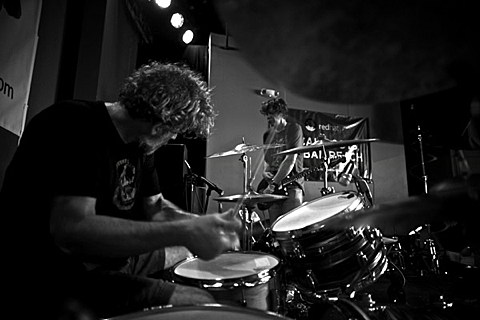 Just yesterday (8/20), Thurston Moore detailed his new album, The Best Day, which was recorded with his new band -- his Sonic Youth bandmate Steve Shelley, My Bloody Valentine's Deb Googe, and James Sedwards. Now he's announced another new LP, this one with Caught on Tape, his avant-garde collaborative project with John Moloney who he played with in Chelsea Light Moving. The album's called Full Bleed, is due out October 21 via Nothern Spy, and while no music has been released from it yet, the press release did come with this gem of a quote:

Q: How did playing black metal rub off on you for Full Bleed? It certainly sounds like it may have.

Thurston Moore: Black Metal is music made by pussies of the lowest order, and we felt it was necessary to investigate this aberrant anti-music behaviour. We feel like the sound and attitude of black metal is a loss of self, life, light and desire in a way where it becomes so negative that a whole new bliss arrives where we become super pussy.

Well there you have it. Watch a live video of Caught On Tape from 2012 below...