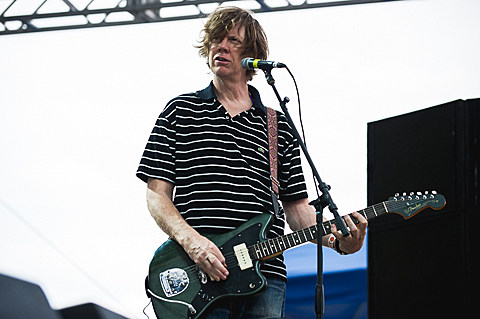 Were you trying to be provocative?

That was really taken out of context. It was really funny how people got tweaked by that. I was answering a question. How do you answer a question about black metal? Black metal, it doesn't even consider itself music. In fact, it doesn't want to be confused with any kind of music because it's something else entirely. It's a voided concept from its start [laughs]. It's all about complete disintegration of existence. It's a music that uses the elements of rock instrumentation but it's so anti-everything that, for me, it doesn't matter what you say about it because it doesn't exist. I figured I would just write something ridiculous about it. And boy, did black-metal devotees get really upset by it. You're not supposed to be alive, so why are you getting upset?

(For the record, yes it was taken out of context... by being the only quote provided in Thurston Moore's press release.) The interview continues:

Earlier this year, you played on a black metal album, Twilight's III: Beneath Trident's Tomb. What did you take from that experience?

There are certain stylistic maneuvers within black metal that really informed me as a guitarist and I use in my own playing. And I think some of the people who are seriously involved with that scene realized this about me and reached out to me. That's certainly true of Neil [who records as "Imperial"] from Krieg, who sings on Twilight. He's a true black metal aficionado and devotee and he's a real important exponent of that music, and he reached out to me and wanted to know if I would take part in this project. And I think it was a little bit of a risk for those guys having somebody who's not exactly 100 percent in the scene to get involved. But I think they trusted my integrity with it.

And as somebody else said, "Sonic Youth had a song called 'Satan Is Boring' - he's been attacking our lord ever since the Eighties!" I super enjoyed making that record. That's a wild community. It takes a lot of stamina to keep up with those guys because they're monsters.

The Thurston Moore Band (featuring Sonic Youth's Steve Shelly, My Bloody Valentine's Deb Googe, and James Sedwards) will bring their tour to NYC on October 21 at Saint Vitus (tickets) and October 26 at Rough Trade (sold out). Both shows are with PCPC, the new collaborative project of Parquet Courts and PC Worship.