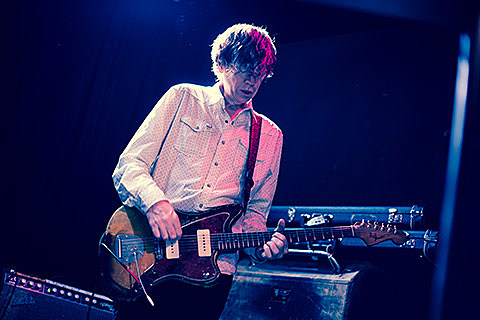 The Thurston Moore Band -- aka Thurston, his former Sonic Youth bandmate Steve Shelley on drums, My Bloody Valentine's Deb Googe on bass, and guitarist James Sedwards -- put out their SY-esque The Best Day earlier this year and recently toured it, hitting NYC twice. They have more dates coming up, including a return to NYC on December 11 at the Marlin Room at Webster Hall. That's a free show presented by Norton Antivirus and Pandora, but you have to RSVP to get in. All Thurston dates are listed below.

The Hold Steady have also expanded their New Year's Eve celebration. The NYE show at MHOW sold out long ago, but they've now added a second show happening the night before (12/30) at the same venue. Both are with The So So Glos. Tickets for the 12/30 show go on sale at noon on Friday (11/21) with AmEx and artist presales starting at noon on Wednesday (11/19).

Updated Hold Steady dates are listed, with those Thurston Moore dates, below...