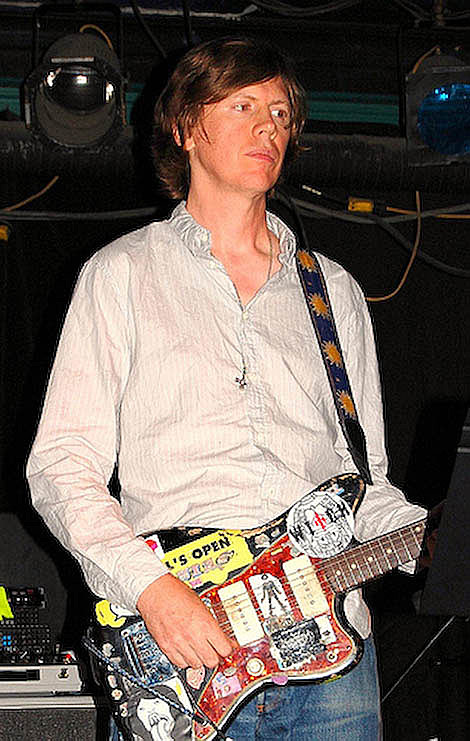 There are many sides to Thurston Moore and each are represented when he plays- or rather, shreds- his Fender Jazzmaster so hard you can barely catch your breath. Last night (September 19, 2008) he gave the crowd at the Pearl Street Nightclub, in his hometown of Northampton, Mass., the goofy, fun and relaxed Thurston.

I've seen him with Sonic Youth many times- in venerable venues like McCarren Park Pool, Central Park SummerStage and even the tiny Maxwell's in Hoboken. I've seen him play guitar noise in dingy Bushwick lofts and at the tavern at Hampshire College in Amherst. But it was last night that Thurston came alive as a human and not just a rock star. 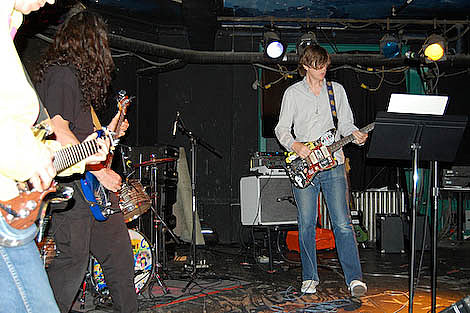 The performance was part show, part rehearsal for the All Tomorrow's Parties Festival this weekend in Monticello, NY. He is set to play 1995's "Psychic Hearts" in its entirety and last night he played each track with a rare dedication. Thurston is the type of artist who is always seemingly 100 percent there. Sure, there were a few fumbles and he had giant note cards with the lyrics scrawled across them on a music stand, but the songs are that great.

Accompanying Thurston was the ever-present and dedicated Steve Shelley on drums (he also played on the record), Chris Brokaw on guitar and a long, curly haired bass player named Mutilation. The group is tight- both musically and personally. They have been touring for the past year, off and off, behind Thurston's recent solo album, "Trees Outside the Academy."

The songs are raw and for the most part short and punk-inspired ditties. Thurston and Chris have developed a certain guitar bond over the last year that is evident. Brokaw watches Thurston for cues, and as he is such a skilled player, can respond with textured and harmonic sounds that stabilize Thurston's chaotic strumming. 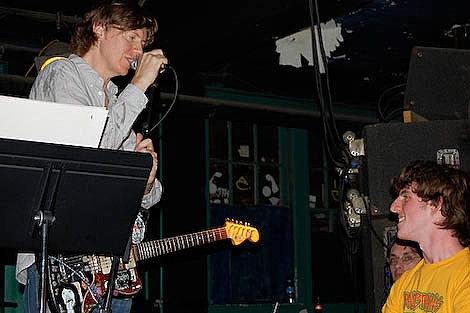 The banter between performers and audience was exciting and rare. At one point Thurston marveled at a young fan in front of him and asked, "Where were you in 1995?", after explaining he was living in New York, very in love with his wife and with a new baby.

The kid stammered, knowing that he was caught, and answered eventually that he was "7 and knew nothing." Thurston said he could be his father to which the kid responded, "My Dad is not as cool as you."

The crowd laughed and then Thurston said something very telling about himself and about his view of his career.

"Your Dad will always be the coolest person in your life whether you like it or not."

The show at All Tomorrow's Parties, if half as exciting as last night's, will surely be a treat. Try to get up front.

some more pictures from the evening.... 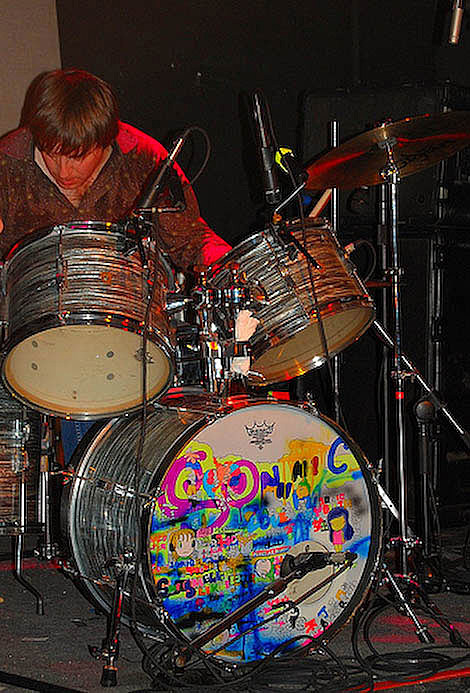 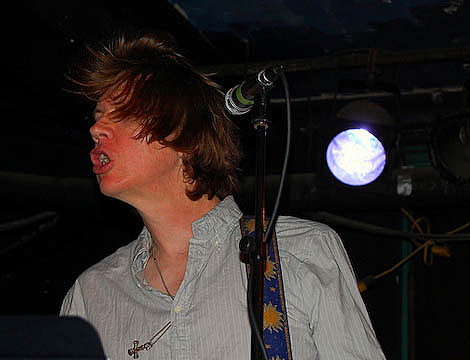 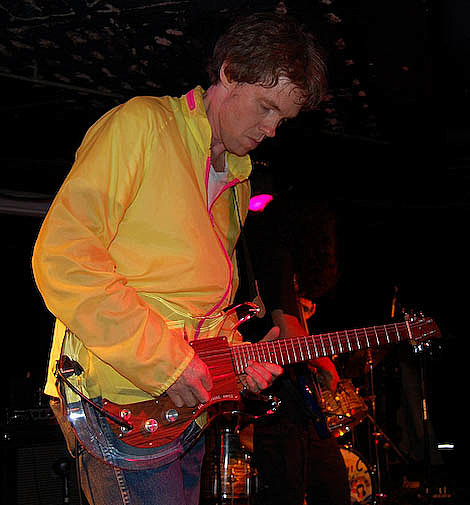 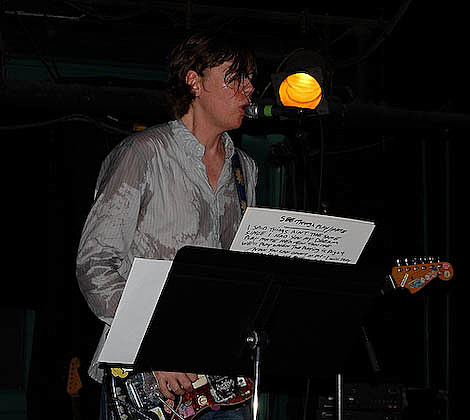 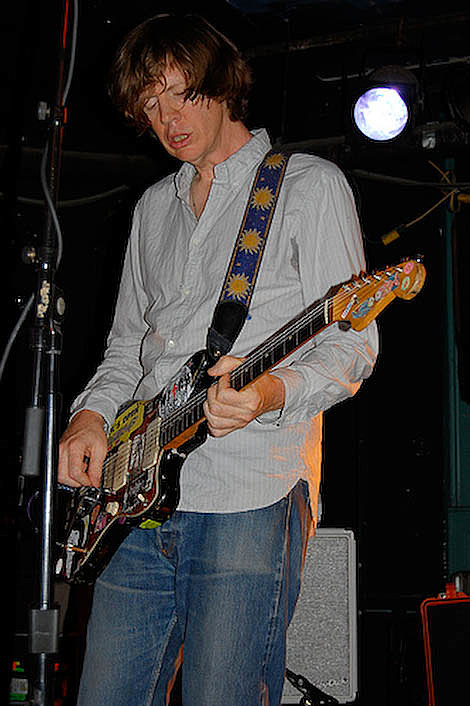 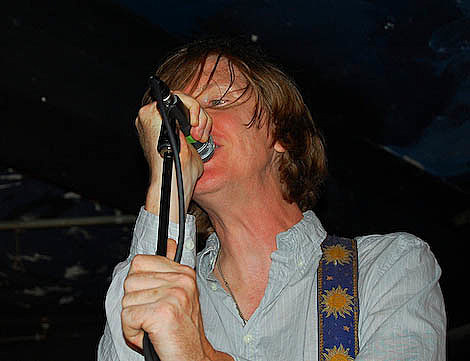 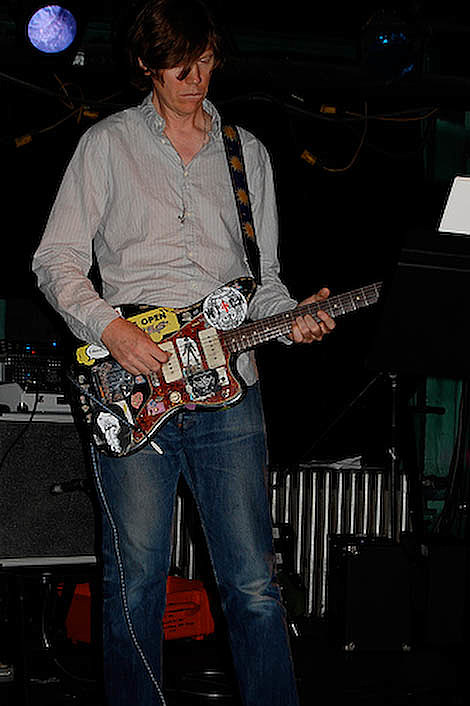 See what else Thurston has been up to.