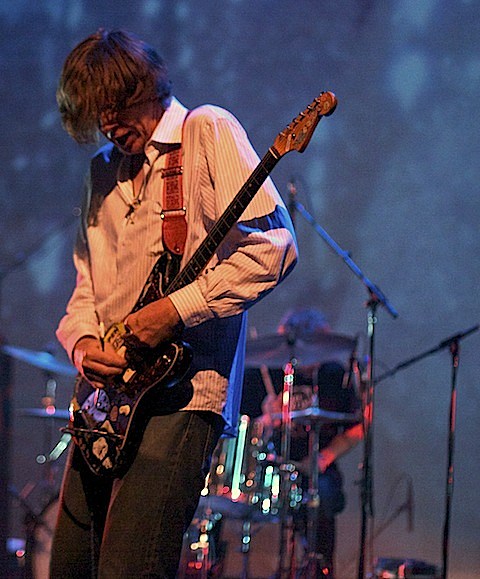 Thurston Moore's new band, Chelsea Light Moving, who played a few shows in June (Sled Island included) has finally announced a show in Thurston's hometown of NYC. Chelsea Light Moving will play Issue Project Room 285 Kent on September 12 with Steve Gunn and White Out. (UPDATE: The show is presented by Issue Project Room but it's happening at 285 Kent.) Tickets for that show are on sale now. All proceeds go to Tom Carter.

You've already heard the band's first song, "Burroughs," which you can now watch "the officially unofficial video" for below. They've since revealed two more songs, "Groovy & Linda" and "Frank O'Hara Hit," both of which you can download above.

Chelsea Light Moving isn't the only new project of Thurston's. It was also recently confirmed that he joined black metal supergroup Twilight, which there has been talk of since 2010. Thurston joins a lineup of Nachtmystium's Blake Judd and Sanford Parker, The Atlas Moth's Stavros Giannopolous, Leviathan's Wrest (aka Jef Whitehead), Krieg's Imperial (aka Neill Jameson), and Isis/Old Man Gloom's Aaron Turner. In a press release (via P4K) Thurston says, "We're not coming together to make music, we're joining forces to destroy all rational thought."

In other Sonic Youth news, in an interview with BBC Radio 5 Live, Lee Ranaldo revealed that the band hope to release a deluxe edition of Sister and live albums from specific points in their career, with a 1985 live album coming "in the next couple months." They also have recordings they made for films that were never released that they'd like to get out there.

That video is below.