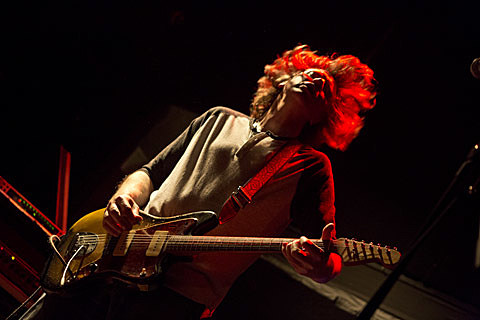 As discussed, Thurston Moore is kicking off a residency at The Stone with two New Year's Eve shows at the venue. His first show is an 8 PM duo set with the venue's artistic director John Zorn ($25 at the door), and since we last spoke, he's expanded the schedule for the second show.

It begins at 10 PM with a previously discussed trio set of Thurston, The Minutemen's Mike Watt, and Black Flag/Sonic Youth/Minutemen/etc album designer Raymond Pettibon (brother of Greg Ginn). Then from 11:30 PM to 1 AM, Thurston's current band Chelsea Light Moving will play. Admission for the late show is $50 at the door and that gets you into the 10 PM set and the 11:30 set. Doors open at 9:45 and only 75 people will be admitted, so get there early.

Thurston's residency continues through January 5, and includes shows with his Chelsea Light Moving bandmate Samara Lubelkski (1/2), his Sonic Youth bandmate Steve Shelley (1/3), and SY's Lee Ranaldo was added to the one with CLM's John Moloney (1/4).