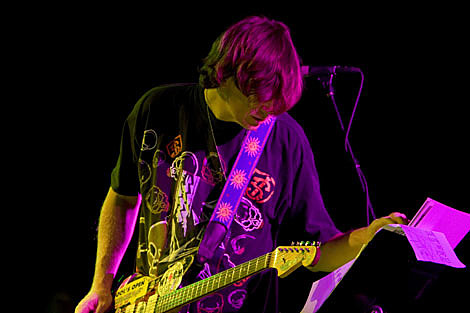 2. Let the Right One in (Låt den rätte komma in) - Norwegian movie about a 12 yr old boy who is bullied and meets a friend - a 12 yr old vampire girl. Sweet and sticky.

7. MV Carbon - The Dislodged Parahelion CD - MV is more known as one half of Metalux who have some records out, most notably on Load. This CD is a solo thing she sold on some gigs — beautiful and gracefully off balance, mesmerizing and edged. She’s been duo-ing with Tony Conrad recently.

8. Malkuth - black metal trio from NYC with members from No Neck Blues Band, which maybe shouldn’t work but DOES. A very real grasp of the defiled-music tenets of BM.

9. Live at the Masque-Nightmare in Punk Alley - photo book edited by Brendan Mullen who ran the infamous 70s punk basement club in Hollywood. Impressive publishing effort by Gingko Press of how to present a rock n roll substrata in all it’s maniacal glory. Loaded with ephemera, memorials and pix of not only the big namers like The Germs, X etc but all the secondary, tertiary bands who played (some who had yet to really make the transition from 1975 to punk yet.) Lovely.

10. The Evolution of A Cro-Magnon - memoir by John Joseph, singer of the Cro-Mags. Kinda like the Ringolevio of the early 80s NYC hardcore scene. And written in a super-1st person narrative where he will, while talking about someone, call that person out (”Hey Vinnie, if yr reading this, get in touch man, gotta work some shit out”) - not a direct quote but like that. Harrowing pre-teen urban nightmare life saved by an epiphany at a Faith/Untouchables/Bad Brains gig in Virginia. A gripper.

That list is via Matador. Sonic Youth are playing the No Fun Fest in 2009. The Cro-Mags are playing Knitting Factory on Sunday.