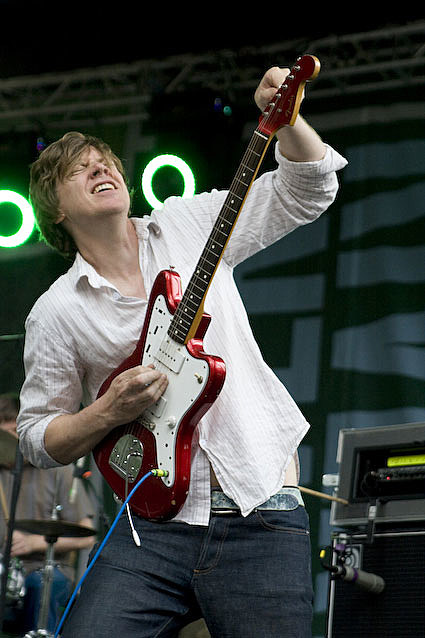 Sonic Youth's new record, The Eternal, is still set for a June 9th release on Matador Records and the label is taking preorders for the album through its Buy Early Get Now program...

Along with your preorder of 'The Eternal' on LP or CD, you'll get an instant stream of the album when BEGN launches on April 28, and later (either picking it up at your fave local record store or through the auspices of the U.S. Postal Service) a bonus limited edition live LP [while supplies last] culled from Sonic Youth's July 4, 2008 show in Battery Park, which will contain an exclusive poster. Additional MP3's will be delivered via the BEGN site before or after the album's physical release date (June 9).

As reported previously, Sonic Youth is also releasing two exclusive split 7"s (one with Beck, one with Jay Reatard) for Record Store Day on April 18th.

Tuesday, April 7th (tonight), Thurston Moore curates and performs at the Sessions at Santa's at Santos Party House. You may remember the Stereogum-hosted series from its Tuesdays in March at the venue. The bill includes performances by Thurston Moore/OkkyungLee/Ikue Mori Trio, Fat Worm of Error and Noise Nomads. (Tickets are on sale.) Flyers for the next three Sessions are below.

Moore talked with Stereogum about the improv evening and future projects, including Sonic Youth's No Fun Fest performance scheduled for May 16th...

STEREOGUM: No Fun is coming up as well. Will [Sonic Youth] be playing material from the new album at that? Doing a noisier set?

TM: We're going to compose something distinct for No Fun -- it will be fucking insane...

That might shed a little light on Sonic Youth's No Fun Fest plans, but not on the program for the group's four-night run (April 16th-19th) at BAM. Those unique performances will celebrate the 90th birthday of dance choreographer Merce Cunningham. Also on the BAM bill are "former Led Zeppelin bassist John Paul Jones and mixed-media sound composer Takehisa Kosugi."

SY's Lee Ranaldo just performed an original composition with the Bang on a Can All-Stars on Thursday, April 2nd. How was that?

Flyers (NSFW) for the April dates of the Sessions at Santa's series (minus the unannounced April 28th lineup), plus a 1991 Nardwuar interview that includes Kim Gordon complimenting Led Zeppelin (at the end), and all SY tour dates (with a bunch of European festival stops) below... 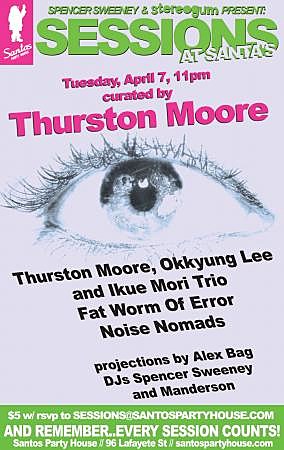