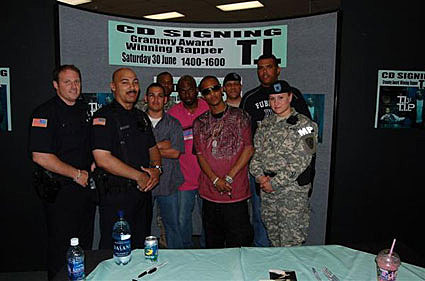 Paper Trail is the sixth studio album by rapper T.I. scheduled to be released August 12, 2008. He is working on the new studio album while under house arrest on pending gun charges. He has completed 50 tracks for the album already. He says that he only likes about 16 of them though and plans to produce about 16 more. The album is entitled Paper Trail, which comes from lyrics he has written down on paper. He abandoned this style of rapping after his first album I'm Serious. "He wanted to take more time to really put something down (this time)," explains his rep. The album is expected sometime in 2008. According to his MySpace page, Paper Trail is set to be released August 12th, 2008. [Wikipedia]

T.I. will play United Palace Theatre in NYC on June 12th. Without looking it up, I'll assume that by that date (if not already) he will be off house arrest. $69.75 tickets go on sale Saturday @ 10am.