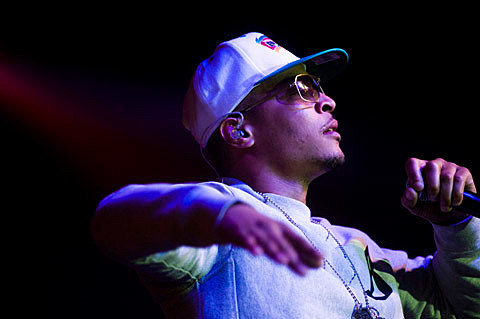 T.I. resurfaced at the tail-end of 2012 with Trouble Man: Heavy Is the Head, a solid comeback album and a great reminder of who's actually responsible for Trap in a year when people think it's a new genre. You can stream six of its tracks, including party banger "Ball" and the Andre 3000-featuring album highlight "Sorry," below.

Back in December, T.I. came to NYC for a show at Best Buy Theater with A$AP Rocky (who we just played Public Assembly), and he'll be returning to that venue for a show with Joe Budden on March 7. Tickets for that show are on sale now. It's part of Metro PC's 5th anniversary of their "5 Boro Takeover Tour," which also includes tonight's (2/26) Kendrick Lamar shows at Roseland and the Alicia Keys/Miguel shows.

The Best Buy Theater show is T.I.'s only announced date that we're aware of at the moment. Song streams below...