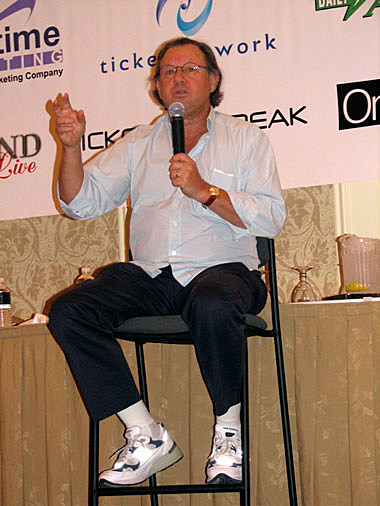 "Mr. Rosen, 67, is the godfather of the $18-billion-a-year tickets business. Go to almost any big-name concert -- or to a Dodgers game or to a Broadway show -- and the odds are that you will pay dearly for his legacy.

Those you've-got-to-be-joking prices are, in good part, Mr. Rosen's handiwork. Starting in 1982, he built Ticketmaster into the tickets giant that drives many people nuts. Even before the company merged with Live Nation Entertainment last year, fans and even some performers, like Pearl Jam, complained that it was a near-monopoly. Despite the protests and a nail-biting antitrust investigation, the Justice Department disagreed and approved the merger.

So it might come as a surprise that Mr. Rosen, of all people, wants to challenge this behemoth, which sells tickets for more than 80 percent of the major concert venues." [NY Times]