This is the new thing... 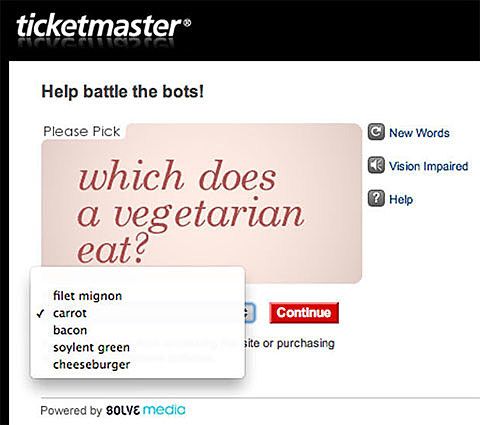 The world's largest online ticket retailer is to stop requiring users to enter hard-to-read words in order to prove they are human.

Captcha - which asks users to type in words to prove they are not robots trying to cheat the system - is used on many sites.

But Ticketmaster has moved to ditch it in favour of a simpler system.

It means users will write phrases, such as "freezing temperatures", rather than, for example, "tormentis harlory".

Captcha stands for Completely Automated Public Turing test to tell Computers and Humans Apart, and was first developed at Carnegie Mellon university in 2000.

For sites such as Ticketmaster, Captcha is used to make sure robots are not used to buy up tickets automatically. [BBC]

Ticketmaster's new system was developed by a company called Solve Media. That's a picture of it above.. "During the purchase process, fans will be presented with phrases, questions or ads from Solve Media instead of the normal, hard to read mix of characters that needed to be deciphered before proceeding with the transaction. This new solution is proven to be a much better user experience and effective at keeping BOTS out of the buying process."