The Boss @ Izod Center in May (more by Tim Griffin) 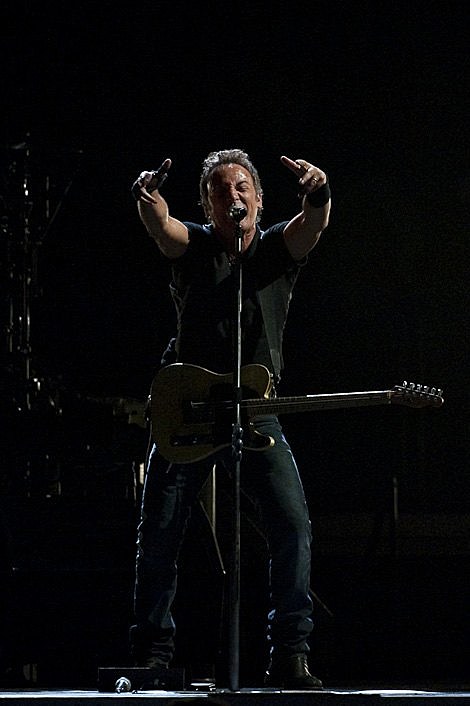 The Federal Trade Commission has settled with Ticketmaster over complaints that Ticketmaster used deceptive tactics to steer Bruce Springsteen fans to expensive scalped tickets last year. As part of the settlement, the company will pay refunds and, in a move that could have a wide impact on the multibillion-dollar resale business, make disclosures about the availability of the tickets it resells.

The settlement, announced Tuesday by the F.T.C.'s chairman, Jon Leibowitz, concerns 14 Springsteen concerts last May and June. Fans trying to buy tickets through Ticketmaster's Web site were pointed to a subsidiary site, TicketsNow. In what Mr. Leibowitz described as thousands of instances, brokers on TicketsNow -- an eBay-like resale marketplace with no price caps -- advertised tickets they did not have, and fans never got the tickets they paid for.

"TicketsNow.com sold phantom tickets without letting consumers know that the tickets did not exist," Mr. Leibowitz said in a statement. "Then the company held on to consumers' money, sometimes for months, when it knew those fans weren't going to see Springsteen. Clearly consumers deserve better. They deserve to know what they're buying, including the risk that their tickets won't materialize." According to the settlement, Ticketmaster must refund to fans who used TicketsNow the difference in price between the tickets' face value and the final amount. Mr. Lebowitz said those payments could amount to more than $1 million. In addition, brokers on TicketsNow must disclose when they are listing tickets they do not have in hand, and the F.T.C. is sending letters to about 10 large ticket resellers warning them to comply with the law.

Scalped Springsteen tickets have been a focus of news-media and political pressure on the concert industry since early last year, when fans for two Springsteen shows in New Jersey were directed from Ticketmaster to TicketsNow while tickets at face value were still available. Ticketmaster settled with the state of New Jersey over those concerts.

In other news, Maryland's approximately-20K-capacity Merriweather Post Pavilion (a venue now known for other reasons than just being a venue) has dropped its deal with Ticketmaster/Live Nation for Ticketfly...

"Merriweather Post Pavilion in Columbia, Md., has inked an online ticketing and marketing deal with Ticketfly. The deal marks the largest venue contract to date for the upstart ticketing company, which also handles ticketing for 9:30 Club in Washington D.C., among other venues. The 9:30 is owned and operated by independent promoter I.M.P., which also books and operates Merriweather." [Billboard]

I.M.P. also co-founded the Virgin Vestival in the USA along with one Andrew Dreskin...

Independent concert promoter Seth Hurwitz and the Maryland-based companies he co-owns, It's My Party (I.M.P.) and It's My Amphitheatre (IMA), have taken legal action against Live Nation.

In an 11-count lawsuit filed shortly after Live Nation and Ticketmaster announced their intentions to merge in February, plaintiffs I.M.P. and IMA allege that Los Angeles-based Live Nation "deliberately" and "unlawfully" acquired monopolistic power over promotion for the national concert market, and has used its influence to "coerce" artists from only appearing at amphitheaters and other venues the company owns, operates or books.
[Billboard - June 12, 2009]

All connections considered, it's not that surprising how this is all playing out, especially now that Ticketmaster and Live Nation actually decided to merge which forces promoters who compete with Live Nation to decide if they want their competitor to sell their tickets for them.

What does it mean for NYC? How long until Bowery Presents (who probably sells more NYC tickets total through Ticketmaster than anyone else in NYC at the moment) moves to Ticketfly too? Ticketfly is already selling tickets for a few NYC venues: Brooklyn Bowl, Littlefield and Knitting Factory / Warsaw. Nothing on that list is as big as Merriweather, but Brooklyn Bowl is a Bowery Presents-booked venue (though important to note: Brooklyn Bowl were using Ticketfly before Bowery was in the picture there). And even before the TM/LN merge we learned that Bowery wasn't 100% committed to Ticketmaster when they started selling tickets to their NJ venue Wellmont Theatre through Tickets.com (though it is of course possible that they use tickets.com there due to some strange contract that came with the venue when they opened it.... regardless, anyone who has tried tickets.com knows that it won't ever be where Bowery moves permanently).

More details of the Baltimore story are below...

Through Ticketfly, customers will not have to pay a fee to print tickets at home, and service charges will drop as much as 30 percent, Hurwitz said. ...

The first two shows offered through Ticketfly, My Morning Jacket's May 1 performance and the May 16 Sugarland concert, will go on sale at 10 a.m. Feb. 26.

"I know people hate service charges, but they're a fact of life," Hurwitz said. "We wanted to get them as low as we could."

Last year, Hurwitz filed suit against Live Nation, claiming the company acquired a monopoly on the national touring market and used its leverage to "entice and coerce artists to appear only at amphitheatres and other venues it owns, operates or at which it controls the booking." The lawsuit is pending.

"We're like the Goldman family in the O.J. trial," Hurwitz said. "The government didn't help, so we're taking matters into our own hands."

Ticketfly was launched by the co-founder of pionering online ticketing company TicketWeb, and uses social media to help promote its shows. It currently sells tickets for the Knitting Factory, Bimbo's 365 Club in San Francisco, Brooklyn Bowl in New York and Troubadour in Los Angeles.

Merriweather's contract with Ticketmaster expired in 2008, and I.M.P. was using Ticketmaster at will since then, Hurwitz said. He hopes his decision will prompt other independent venue owners to sign with smaller ticket sellers such as Ticketfly.

"Hopefully this move will demonstrate to people it's possible to have a choice," he said. "We wanted to make that choice -- rather than sitting around whining about it." [Baltimore Sun]