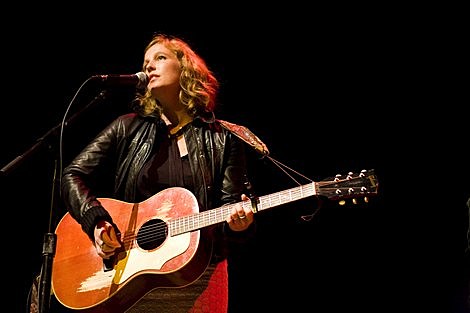 "[Mixtapes were] how I was introduced to music that has been so important to me," she tells The Boot. "Someone made me a mix of Maria McKee and Lone Justice, and someone made me a tape that had Mary Lou Lord, Big Star and the Jayhawks. I was 18 years old -- I didn't know about these people. I just found so much neat new music that way because people really did this kind thing."

The North Carolinian would revisit the subject on 'Mixtape,' one of 12 songs from her new album, 'See You on the Moon.' While some of the country elements that have long been associated with her music can be heard on the record, 'See You on the Moon' also reflects a continued evolution in her sound and approach.

Singer-songwriter Tift Merritt plays a June 17th show at NYC's Hiro Ballroom. Tickets are still on sale. That show and others are with Broken Social Scene member Jason Collett, who joins her on part of her June/July tour.

After her Hiro Ballroom show, Tift's next two dates in Massachusetts are with somber songwriter Richard Buckner. Buckner also has a string of June tour dates (and some in September too) coming up - he opens for Jay Farrar at Bowery Ballroom on June 4th and at Maxwell's on June 5th.

Full tour dates for Merritt (who opens for Amos Lee at Westhampton Beach PAC on Long Island on July 2nd), Collett and Buckner are below...