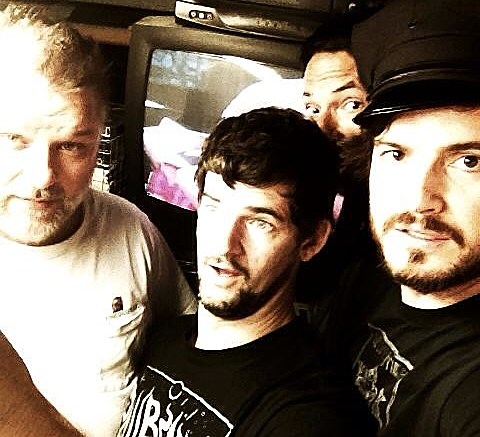 St. Louis' Tilts, the sorta stonery/sorta power poppy/definitely rocking quartet featuring Andrew Elstner of Torche and Riddle of Steel, funded their second record through Kickstarter last month. Titled Cuatro Hombres, the album is set to be released through Robotic Empire on June 24. Rough tracks teased by the band definitely aren't hurting for riffs, sticking the landing within the Venn diagram that conjoins Queens of the Stone Age, Shiner, and a Yellow Pills compilation. Fans of Tilts' eponymous EP collection that greatly improved many 2012 summer days will no doubt be just as smitten with the new stuff.

To celebrate their sophomore status, Tilts will be hitting the road for select dates. On June 27, the tour gets rolling in Milwaukee, wraps up on July 2 in Atlanta, and hits Chicago, NYC and other places along the way. The NYC show happens at Cake Shop on June 30 with similar riff-smiths (though with a bluesier bent) The Brought Low and the slightly spacier Thursday/Rival Schools offshoot States and Kingdoms (P.S. please record, please). Tickets are $8 dollars at the door.

As for Torche, the sludge pop heavies are presumably still working on their next album to be released sometime this summer. In March, bassist Jonathan Nuñez said:

"The music is like what we do, along with Motörhead: very driving, very heavy on the toms, real pounding rhythm section, the guitars are just nonstop, but with a melodic twist. Then the vocals come in, and it's this whole Psychedelic Furs--and maybe Guided By Voices--phrasing. It's an exciting song. We were like, 'Whoa.' None of us saw that coming. I think that's what keeps us entertained."

Whoa indeed. Guitarist/vocalist Steve Brooks just wrapped up his tour with Floor who are supporting their newest album, Oblation.

All of the dates appear below along with Tilts' unmastered version of "Touchdown", four tracks from their 2012 self-titled album, and videos of their future Cake Shop compatriots...