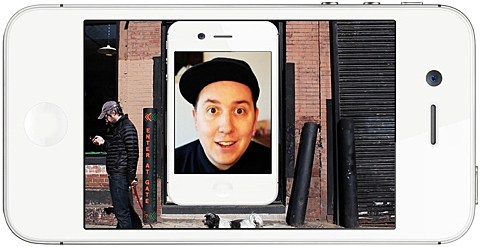 Brooklyn artist Tim Fite is releasing a new album, iBeenHACKED (not a reference to the U2 album) (or the name of a giant corporation), on October 7. He describes it as "a music/art project satirizing and celebrating the highs and lows of digital culture, examining the ways technology and connectivity are hacking our daily lives, and altering the codes that we live by." The project will include:

• a limited edition series of hand made glass "Phonies."
• a Brooklyn storefront turned into a giant smart-phone.
• alternative digital-music monetization strategies such as the sale of advertising space and personal shout outs in songs.
• a body of songs that are wickedly insightful and often laugh out loud funny - wrestling with subject matter ranging from the at nauseum action of online "liking" ("Like"), smart-phone addiction ("Check Yo Cell"), the cult of macintosh products ("Big Mac"), the binge-watching epidemic (4 Seasons), and plenty more.

Its newest single, "Like," is just as satirical as you'd expect, and it premieres in this post. You can listen below.

Tim's also got a European tour planned with Berlin's wild Bonaparte, who he's played NYC with before. All of those dates are listed, with the new song stream and album trailer, below...