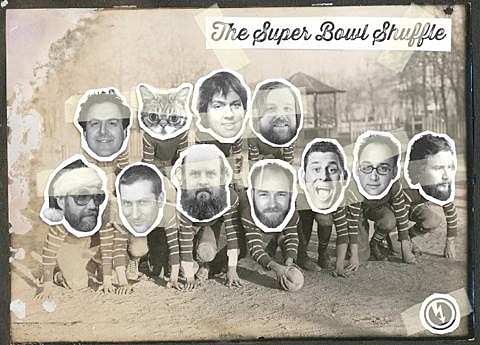 Some of you may remember "The Super Bowl Shuffle," a Sugarhill Gang style rap single recorded by the Chicago Bears Shufflin' Crew at the tail end of 1985. (The Bears would go on to win Super Bowl XX a couple months later.) Featuring verses by Walter Payton, Jim McMahon, William "Refrigerator" Perry and other members of the team, the six-minute single featured awkward rapping (and worse dancing in the video)...but you couldn't turn on a radio without hearing it. If you missed this blip of pop culture history, you can watch the original music video below.

With two weeks until Super Bowl XLVIII -- which is happening in the NYC-area (with lots of concerts) if you just woke up from a coma -- Sean Cannon of WFPK's "After Dark" has orchestrated a cover of "The Superbowl Shuffle" featuring a veritable Who's Who of indie rock, internet, and comedy talent, including Jim James (of My Morning Jacket), Tim Harrington (of Les Savy Fav), Tom Scharpling (of The Best Show), web cat Lil Bub, wrestler Colt Cabana, John Roderick (of The Long Winters), filmmaker David Wain (Wet Hot American Summer), Comedy Bang! Bang!'s Scott Aukerman, Kyle Kinane, and occasional BV contributor and WFMU DJ Dave Hill (who plays guitar on the cover). Proceeds from sales of this 2014 version of "The Superbowl Shuffle" (which keeps the original rhymes) go to Reading is Fundamental.

Just how did this come about? Cannon offers up a lengthy/labyrinthine explanation which you can read, while listening to the song, below...

People keep asking me, "Sean, how did you create this amazing all-star cover of the classic Chicago Bears hit song 'The Super Bowl Shuffle'?!?!" And since there are a lot of unsubstantiated rumors flying around, I'm going to set the record straight. Let me start from the beginning.

One late spring evening, I was busy working on a sizzle reel for my upcoming Tom Hanks documentary "T-Hanks for the Memories," when I had an epiphany. I was reminiscing about the 1985 T-Hanks classic, "The Man With One Red Shoe," which featured a masterful performance from Tom Noonan. And of course, how could I think of Tom Noonan without considering his turn in "Law & Order: SVU" as Jake Berlin. Needless to say, this reminded me of the equally breathtaking "L&O:SVU" role of Arthur Esterman, an ecstasy-addicted doctor who murders his wife in a park. Esterman was ably portrayed by the venerable Michael Gross. Most folks associate Gross with his role as Steven Keaton in "Family Ties." In my mind, though, he'll always be Burt Gummer of "Tremors" fame. That said, the best in the "Tremors" series is obviously the fourth installment, "The Legend Begins," where he actually plays Burt's great-grandfather, Hiram. That movie also included an understated, but stunning performance from Billy Drago, who you no doubt remember as the villainous John Bly on the cancelled-too-soon Bruce Campbell series "The Adventures of Brisco County Jr." The real glue that held "Brisco" together, though, was John Astin's Professor Wickwire. That role, while not as iconic as his take on Gomez Addams, was just as good as his run on "Webster" as Uncle Charles. He was something of a foil for Alex Karras' George Papadopolis. And well, how could I think about Karras without considering his take on the real-life restaurateur Jimmy Butsicaris in the underappreciated "Jimmy B & André," which featured a then-unknown William "The Refrigerator" Perry. There's no way to mention the Fridge without thinking of his white-hot-but-abbreviated rap career, closing out "The Super Bowl Shuffle." To bring it all back around, that track was released the same year as "The Man With One Red Shoe." Eerie, isn't it?

So here I was, thinking about that song -- when the light bulb popped on. "You know what people want? They want a version of 'The Super Bowl Shuffle' for a new generation!" At that point, I put word out to a couple of Hollywood exec and record label folks to see what I could get. After turning down 254 actors, musicians and miscellaneous celebrity types, I settled on the perfect nine people and one cat.

I flew them all (first class, of course) to my home base of Louisville, put them up in the historic (and expensive) Seelbach Hotel, had that board from "Sound City" flown in, and hired a crack team of producers to assemble the track.

By the time we got around to actually recording, though, I realized I'd run through most of the budget without thinking to reserve a studio. So we huddled everyone into my dining room and did a single take. Sure, I wanted more than one take. But Lil Bub had to be at a movie premiere, so that was all we could fit in before she left. And hey, at least she got to meet Robert De Niro.

That pretty much brings us to today (if you ignore the eight months of post-production arguments about the snare sound in the track), with my entire life's work finally making its way into the world. Go to misfirerecords.bandcamp.com and buy it! Pay more than $1, too, because every single penny we get goes to one of the best charities around, Reading Is Fundamental. In other words, I will be buying zero Fabergé eggs with your money.

If you're not familiar with Reading Is Fundamental, go to www.rif.org and educate yourself! Literacy is important, even if it did enable you to read this post from me...

lyrics
(Chorus)
We are the Bears Shufflin' Crew
Shufflin' on down, doin' it for you.
We're so bad we know we're good.
Blowin' your mind like we knew we would.
You know we're just struttin' for fun
Struttin' our stuff for everyone.
We're not here to start not trouble.
We're just here to do the Super Bowl Shuffle.

(Tim Harrington)
Well, they call me Sweetness,
And I like to dance.
Runnin' the ball is like makin' romance.
We've had the goal since training camp
To give Chicago a Super Bowl Champ.
And we're not doin' this because we're greedy.
The Bears are doin' it to feed the needy.
We didn't come here to look for trouble,
We just came here to do
The Super Bowl Shuffle.

(Tom Scharpling)
You're lookin' at the Fridge,
I'm the rookie.
I may be large, but I'm no dumb cookie.
You've seen me hit, you've seen me run,
When I kick and pass, we'll have more fun.
I can dance, you will see
The others, they all learn from me.
I don't come here lookin' for trouble,
I just came here to do
The Super Bowl Shuffle.

(Jim James)
I'm Samurai Mike I stop 'em cold.
Part of the defense, big and bold,
I've been jammin' for quite a while,
Doin' what's right and settin' the style,
Give me a chance, I'll rock you good,
Nobody messin' in my neighborhood.
I didn't come here lookin' for trouble,
I just came to do The Super Bowl Shuffle

(Scott Aukerman)
I'm mama's boy Scott Aukerman, one of a kind.
The ladies all love me
For my body and my mind.
I'm slick on the floor as I can be
But ain't no sucker gonna get past me.
Some guys are jealous
Of my style and class,
That's why some end up on their whistle,
I didn't come here lookin' for trouble,
I just get down to The Super Bowl Shuffle.

(David Wain)
They say Jimbo is our man.
If Jimmy can't do it, I sure can.
This is Steve, and it's no wonder
I run like lightnin', pass like thunder.
So bring on Atlanta, bring on Dallas,
This is for Mike and Papa Bear Halas.
I'm not here to feather his ruffle,
I just came here to do
The Super Bowl Shuffle.

(Kyle Kinane)
I'm L.A. Mike, and I play it cool.
They don't sneak by me 'cause I'm no fool.
I fly on the field and get on down.
Everybody knows I don't mess around.
I can break 'em, shake 'em,
Any time of day.
I like to steal it and make 'em pay,
So please don't cry to beat my hustle
'Cause I'm just here to do
The Super Bowl Shuffle.

(Colt Cabana)
The sackman's comin',
I'm your man Dent.
If the quarterback's slow,
He's gonna get bent.
We stop the run, we stop the pass,
I like to dump guys on their whistle.
We love to play for the world's best fans,
You better start makin'
Your Super Bowl plans.
But don't get ready or go to any trouble
Unless you practice
The Super Bowl Shuffle.

(John Roderick)
I'm the punky QB, known as McMahon.
When I hit the turf, I've got no plan.
I just throw my body all over the field.
I can't dance, but I can throw the pill.
I motivate the cats, I like to tease.
I play so cool, I aim to please.
That's why you all got here on the double
To catch me doin' the Super Bowl Shuffle.

(Lil Bub)
This is Speedy Willie, and I'm world class.
I like runnin' but i love to get the pass.
I practice all day and dance all night,
I got to get ready for the Sunday fight.
Now I'm as smooth as a chocolate swirl,
I dance a little funky, so watch me girl.
There's not one here that does it like me,
My Super Bowl Shuffle will set you free.

(Dave Hill)
It's Gary here, and I'm Mr. Clean.
They call me "hit man,"
Don't know what they mean.
They throw it long and watch me run,
I'm on my man, one-on-one.
Buddy's guys cover it down to the bone,
That's why they call us the 46 zone.
Come on everybody let's scream and yell,
We're goin' to do the Shuffle,
Then ring your bell.