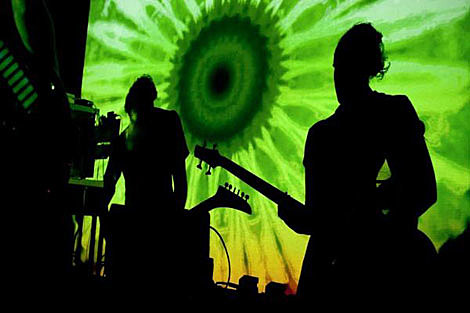 The ongoing Unsound festival continues to impress. LPR will feature the great Tim Hecker TONIGHT (2/10) with Radian, Sweden's Tape, and Mountains with a special and unique set from a "band formed during the kids electronic music workshops" that have taken place throughout the festival. Tickets are still available.

Hecker released two LPs in the past two years: a solo effort entitled An Imaginary Country via Kranky last year and a collabo LP with Aidan Baker on Alien8 called Fantasma Parastasie. The ever prolific Baker has a few different projects up his sleeve but one of those, Nadja, will also be in NYC as part of the Unsound fest.

Nadja is scheduled to open the Issue Project Room on 2/12 with Xavier van Wersch and headliner David Daniell:

As a performer, Daniell utilizes acoustic, electric, and pedal steel guitar along with a variety of electronics. He has worked for over a decade as a member of the improvising blues-drone trio San Agustin, along with many other collaborators through the years, including Tim Barnes, Ateleia, Jeph Jerman, Thurston Moore, Sean Meehan, Loren Connors, Tomas Korber, Greg Davis, as lead guitarist in Jonathan Kane's live band, and as concertmaster for Rhys Chatham's 100- and 200-guitar performances. Current active collaborations include a duo with guitarist Douglas McCombs (of Brokeback, Tortoise, Eleventh Dream Day) and a trio with Christian Fennesz and Tony Buck (of The Necks).

Aidan Baker has a new LP entitled Liminoid/Lifeforms out NOW via Alien 8. Stream the entire thing and/or download one track, "Liminoid Part III", above. After NYC, Nadja will blast off to Europa to link up with OvO and Thrones (who is playing TWO NYC shows, 2/18 and 2/19) for a string of dates in later March/April.

Full tour dates and a bunch of videos are below.