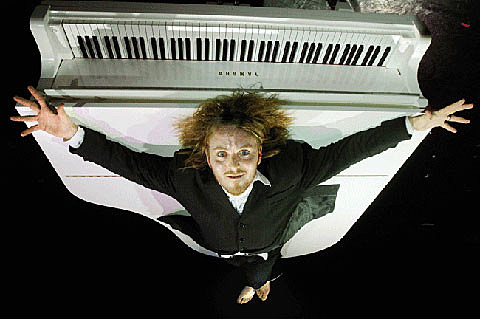 I can't believe I didn't Minchin this earlier. You may have noticed ads for his two now sold out upcoming Gramercy Theater shows (5/4 and 5/5) on BV a while back, but allow me to bring back to the forefront of your consciousness the fact that comedic cabaret wunderkind Tim Minchin is coming to town in May. And by 'town' I mean the NYC area. Lucky for us non-Manhattanites, since the disappearance of those Gramercy ads he has added another show at Brooklyn's Music Hall of Williamsburg on 5/2. Add to that his scheduled appearance at The Bamboozle Fest at the Meadowlands in Jersey on 5/1 and I'd say he has our area properly covered. Non-New Yorkers and people with a fancy for travel can catch him at Sasquatch 2011 or the Wilbur Theater in Boston on 6/4.

I find Minchin to be one of the most talented, creative, and entertaining performers out there. He's not really a stand up comedian per se; he's more of an oddball guy who makes incredibly wonderful and hilarious music and peppers it all with pitch perfect jokes and anecdotes. His style is definitely not for everyone, and his detractors are sure to take to the comments section in force with guns blazin'. But this man is an endless reservoir of talent and hilarity. Besides that, his shows always sell out, no matter where in the world they may be. I can't think of a better way to shake off a case of the Mondays than by filling my guts with beer at MHOW while Tim Minchin does his best to bust said guts wide open with laughter. People often use the term "He killed it", and in the case of Tim Minchin "Killing it" couldn't be more appropriate; you can't spell manslaughter without mans laughter.

Later on in May, comedy returns to the Gramercy for a Doug Benson double-header. On Saturday 5/21 at 4:20pm, catch a special Doug Loves Movies with special guests TBD. The last time he loved movies at the Gramercy he was joined by Anthony Jeselnik, Eugene Mirman, Morgan Murphy, Graham Elmwood and lots of booze. The result was one of the funnest evenings of my life. After DLM, go out, grab a bite to eat, but don't go too far as he'll return to the same venue for special Benson Interruption Live Podcast also featuring special guests at 8:00pm. Unfortunately, Live Nation doesn't offer a ticket combo pack that will get you into both shows and spare you a double convenience charge, but I can't emphasize enough how worth your while it is to go to both of these shows.

And speaking of ads, did you catch the series of Sony Ericsson ads startting Kristen Schaal that are currently decorating the homepage of Youtube.com? Catch Kristen live tonight, 3/22, at SWEET.

Oh, and speaking of comedy at Music Hall of Williamsburg, don't forget to catch Reggie Watts there on March 30th. The early show sold out but the late show is still available.... AND we have two pairs of tickets to give away to the late show too. Details on how to win them are under the video of Reggie performing a new Portlandia theme song at the SXSW IFC House last week, below...

--
TO WIN A PAIR OF TIX to the LATE Reggie Watts show at MHOW: email BVCONTESTS@HOTMAIL.COM (subject: Reggie). Include your first and late name. We'll pick two winners randomly and email them with more instructions. Your info will not be used for evil purposes or shared. Good luck!
--