Timber Timbre at Radio CIty in 2012 (more by Dominick Mastrangelo) 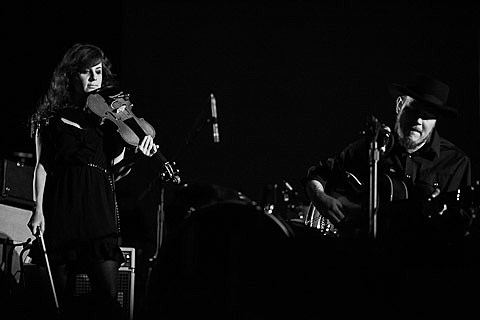 Noir folk Canadians Timber Timbre are about to bring their tour to NYC for a sold out show at Mercury Lounge this Thursday (2/13) with Lowell before they head to Europe. If you weren't able to get tickets to Thursday's show, you're in luck, because the band have added another NYC show happening after the European tour at the larger Music Hall of Williamsburg on April 25. Tickets for that show are currently on AmEx presale and general on-sale starts Friday (2/14) at noon. Updated dates are listed below.

The MHOW show is also after Timber Timbre's new album, Hot Dreams, comes out (due 4/1 via Arts & Crafts), so unlike Merc it's a chance to see them once you've become familiar with the new material. You can get a taste of that material now though, as the band have revealed the video for the album's title track since our last post. It's a shaky, sad country ballad and ends with some sensual '80s sax, courtesy of Colin Stetson.

Watch the video, along with the list of dates, below...