Timber Timbre at Radio City in 2012 (more by Dominick Mastrangelo) 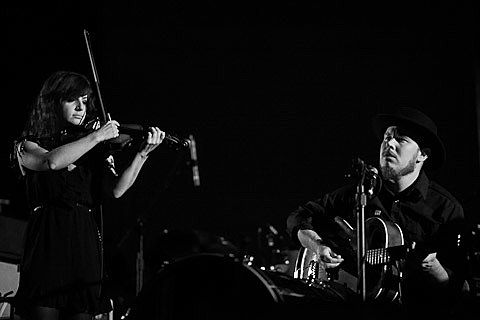 Timber Timbre often fall under the radar a bit in comparison to many of their Arts & Crafts labelmates (at least in the US), but I thought the folk noir of their last album Creep On Creepin' On was one of the more underrated records of 2011, so it's exciting to hear that they'll be releasing its followup, Hot Dreams, on April 1. There's a few guests on the new record, notably including sax man Colin Stetson and Romy Lightman (Austra/Tasseomancy) on backing vocals. No music has been revealed from it yet, but you can check out the album trailer below.

Timber Timbre have also announced some tour dates preceding the release of the new record, including SXSW and a NYC show happening on February 13 at Mercury Lounge with Lowell. Tickets for that show go on sale Friday (1/10) at noon with an AmEx presale starting Wednesday (1/8) at noon.

All dates are listed, along with the album trailer, below...