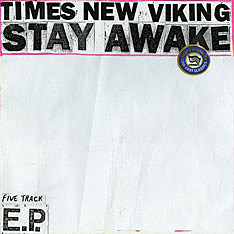 As previously mentioned, Times New Viking are playing a show with the Vivian Girls at Bowery Ballroom on May 11th (tix). Ends up, they're also playing a show in Brooklyn at Market Hotel one day earlier (more details TBA).

Last month TNV played a show at the Wexner Center in their home-stage of Ohio. What makes that interesting is that they played almost all Velvet Underground covers...

their set consisted completely of Velvet Underground songs, in honor of the Andy Warhol "Other Voices, Other Rooms" exhibit, which finished its run at the Wexner Center this past weekend. TNV are joined by C. Spencer Yeh on violin and Mike Hummel on guitar and vocals.

Also in February, Pitchfork TV debuted a series of videos that had TNV playing each track off their new EP Stay Awake (pictured above)...

Ponytail's laundromat performance was part of that series. TNV videos, and all tour dates below...