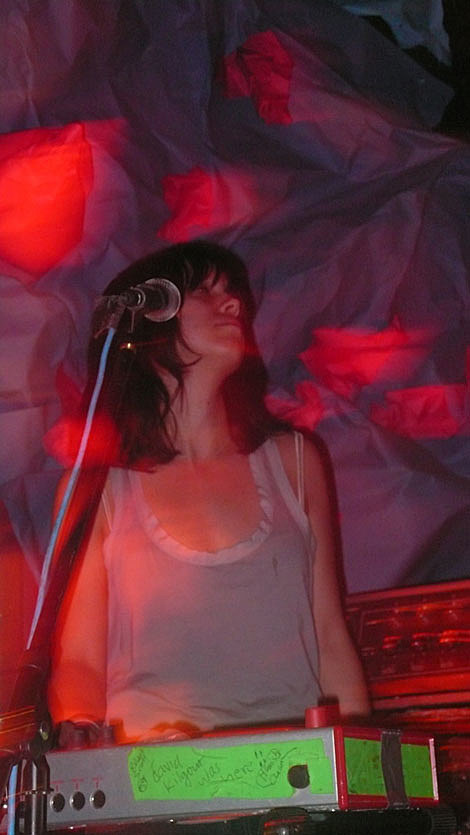 "So, just to get this out of the way: Market Hotel's new art installations make for some fucking awesome background shots. A bit less 'punk'/'DIY' than before, but way more art school dropout/middle school play about the inside of your stomach." [DARKWAVEVAWKRADARKWAVE]

Times New Viking played two NYC shows earlier this week: one on May 10th at the Market Hotel with Blues Control and Pink Reason, and another May 11th at the Bowery Ballroom with Vivian Girls and Stupid Party. MusicSnobbery said, the Bowery show "was a triple dose of low-to-no-fi garage rock as all the bands on the bill had three members."

With those gigs gone, the Bell House has announced that TNV is the "secret guest" at the Agit Reader's one-year anniversary celebration at the Brooklyn venue on Saturday, June 13th. Other acts include Thomas Jefferson Slave Apartments, the Mad Scene and El Jesus de Magico. Tickets are on sale.

Blues Control, who played with TNV on Sunday the 10th, has a short weekend tour coming up and NYC shows scheduled. Those include a Thursday, May 21st show at Coco 66 with Thrones, Lake and Popped Blimp; a Northside Fest appearance at the Shank with Kurt Vile, Grooms, Woods and Pygmy Shrews; and a set on June 21st at Goodbye Blue Monday's Make Music NY festivities. A new LP/CD from Blues Control is due in July on Siltbreeze.

All TNV and Blues Control tour dates, with a video of TNV playing two songs on Record Story Day '09 from their forthcoming Matador album, below...