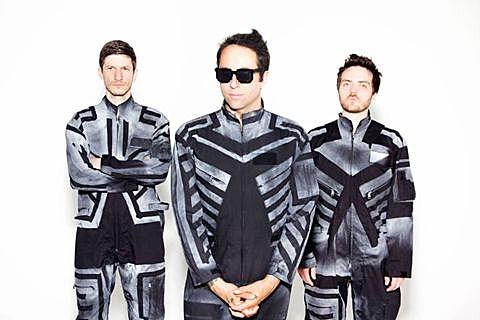 Brooklyn's impossible-to-Google Netherlands are best known for their frontman Timo Ellis, who in turn is best known for his laundry list of high-profile past collaborations. John Zorn, the Melvins, and Yoko Ono (who just played NYC) are all prolific collaborators, but few individuals can claim to have worked with all three.

As you might expect from Ellis's résumé, Netherlands is a pretty strange band. They play gritty, high-energy punk/metal, anchored by a huge distorted synth bass tone; the effect is something like Future of the Left banging out one of Torche's more rambunctious tunes. Even stranger is the video for "Tabitha", which we're debuting in this post. Instead of a narrative, it offers a crazy-quilt of surreal images: claymation animal heads exploding, psychedelic color washes, and grotesque line animations of melting human faces and bursting pimples. The video's got a sickly, sugar-high energy that matches Ellis's yowling vocals and caveman riffs perfectly. If you've ever watched Wonder Showzen, you may pick up a resemblance to AugenBlick Studios' nauseating animated clips. That's a good thing in my book

Netherlands will self-release their second album, Silicon Vapor, on October 29. Stream the video below.