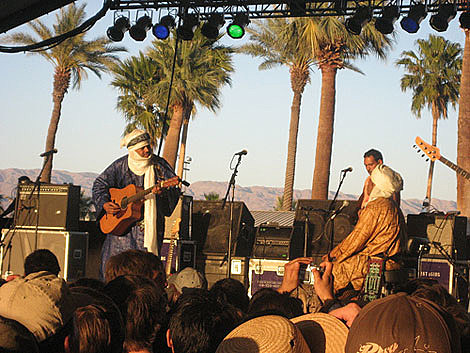 This is the 2009 show that's likely to build into a Coachella legend. Tinariwen's sunset set at the Gobi tent. Standing on the stage, the sextet, dressed in traditional Tuareg robes and headwear and veils, the band, part of a nomadic community of Saharan North Africa, draws influences from the music of the region: Malian guitar pop and a little bit of tangled tunings of its fellow Africaners to further south and west, combined with western electric guitars and this ringing, pure tone that's closest American kindred is maybe Lou Reed's hollow, somewhat distorted electric vibe. Mingle this sound with an acoustic strum, hand claps, bass, percussion and something that we mere mortals can only understand as "groove," and you've got something magical.

The band has been performing in one incarnation or another for seventeen years now -- one for every bullet wound that one member (according to the Internets, so take that for what it's worth) is said to have received after leading several raids. The story goes that he was armed only with a guitar on his back and a Kalashnikov in his hands. He was once reportedly doused with gasoline.

Tinariwen has made their way from Coachella to NYC. You can catch them at Le Poisson Rouge tonight (4/24).