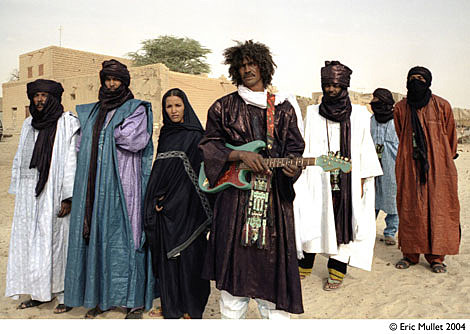 Tinariwen will be playing a series of North American dates this February and March. That includes the previously mentioned NYC shows at Highline Ballroom on February 18th and the Bell House on February 19th. Tickets are still on sale for both. Opening those two shows will be L.A. afro-pop band and all around good time, Fool's Gold.

Fool's Gold were last here when they toured with Edward Sharpe & The Magnetic Zeros and Local Natives in November (a pair of NYC shows), and it was CMJ the month before that when I think they made their NYC debut.

It's freezing outside right now, but this next announcement reminds me that summer is not that far away. Tinariwen have also announced that they'll play a June 26th show at Central Park Summerstage. That's the second official announcement for the outdoor venue's 2010 season. The first was the long--in-advance notice of the upcoming post-summer Pavement shows.

In somewhat related news, Passion Pit and Tokyo Police Club are playing the Prospect Park Bandshell on Tuesday, June 29th. Tickets are on presale now (with general sale starting on Saturday). Allen Toussaint may also be another artist appearing in Prospect Park this summer (6/12).

All Tinariwen and Fool's Gold tour dates and videos for both are below...