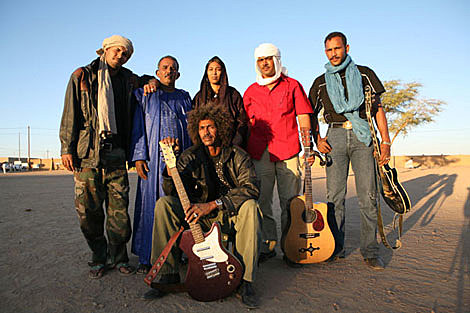 The six members of Tinariwen...are Tuaregs, a nomadic people spread across the Sahara who staged fierce, unsuccessful rebellions during the 1990's in Mali and Niger.

Tinariwen was formed by exiled Tuaregs in a refugee camp in Libya. A Tuareg rebel leader from Mali bought the band its first electric guitars and amplifiers and used its songs for propaganda during the rebellion. A decade of uneasy peace later, Tinariwen sings stark, hypnotic songs about the harshness of desert life and a still-smoldering rage.

With electric guitars replacing more traditional lutes, the songs can suggest the kind of bleak one-chord blues that John Lee Hooker played - music with African origins that has been reworked again in Africa. Every so often, Tinariwen's choppy guitar chords create a kind of North African funk....Yet the power of Tinariwen's music comes not from its modern elements but from its ageless ones: from the Arabic and North African turns of the melodies, from the way terse lines add up to propulsion and profundity, from the austere power of the drone. Although the lyrics are often melancholy, there's no self-pity, just a spartan determination. Most of the singing was done by the group's five men, but in "Aymana," men intoned an overlapping drone note while the voice of a female singer, Mina Walet Oumar, rose above them, sharp and incantatory.

Tinariwen's music seems inseparable from its origins. With the drones and circular patterns, songs can extend like sweeping desert landscapes. And like a nomad traversing those sands, Tinariwen's music carries only essentials and needs nothing more.-[NYTimes, on Tinariwen's 2004 Joe's Pub show]

Tinariwen are planning an April US tour that includes a Friday, April 24th show at NYC's Le Poisson Rouge (tix on sale) as well as a stop at this year's Coachella fest on April 18th. All dates below.

The band just released a live DVD, Live In London, on World Village, and was recently featured in Al Jazeera's six-part documentary The Music of Resistance - see the clip below.

Last year, Tinariwen re-released its 2007 album Aman Iman (translated: Water Is Life) on vinyl on the UK's Independiente label (streaming here). In 2008, Craig Finn and Tab Kubler of The Hold Steady referenced Tinariwen in a Times' "Playlist" article. Kubler said, "Their approach to the electric guitar is radically different from anything else I've ever thought of before. It sometimes makes me feel like I'm not exposing myself to things that might make me become a better player or enjoy music on a different level." (The Hold Steady have some dates of their own coming up too.)

Tinariwen was last in NYC for a 2007 Highline Ballroom gig and an Other Music in-store. All future US dates and video clips below...

Tinariwen other, other doc clip