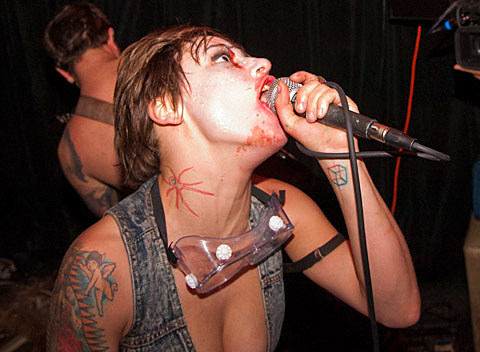 "We did talk a lot at an early point in the band about what we wanted to see in a live show. We were all bored with going to shows and not being entertained. Not seeing the package of killer music and rocking the fuck out. So it definitely became a focus for a Tinsel Teeth show to be a party. Once we started playing out, the actual progression show to show to what you see now came pretty naturally. I can say that one of the first 2-3 shows we ever played was at "summercamp" in Providence. After we set up our gear we ran downstairs, took off all our clothes and covered each other in shaving cream. That was a shocked crowd when we came back up and one hell of a show. It's what I believe set the tone for Tinsel Teeth." - Will from Tinsel Teeth

The nutjobs in Tinsel Teeth kicked off a US tour this past weekend, and will return to play NYC at Death By Audio on July 3rd with Satanized and Xaddax. All tour dates below, a new video for "Stock Footage of Stuntmen" and a very NSFW performance from Cake Shop, below...