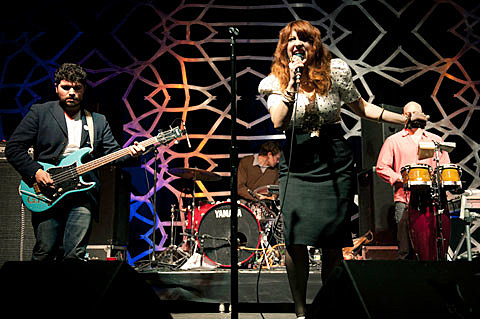 Tippy Toes have existed in different forms over the years but currently consists of Abe Seiferth and Morgan Wiley. Abe and Morgan met at DFA's Recording Studio where Abe was engineering and Morgan was recording keyboard tracks for LCD Soundsystem. They would end up having studios next door to each other in Brooklyn. Late night jams with Abe's drum machines and Morgan's synths soon lead to parties and shows.

Tippy Toes, who, as mentioned above, have existed in many forms (anybody see them with Reggie Watts singing a few years back?), have signed to Jacque Renault's Let's Play House label (Jacques also has a NYC dance party of the same name) and they'll release their first EP on that label on May 20. No tracks have been revealed from it yet but to get an idea of what you might hear, you can stream an 18+ minute live jam below. Tippy Toes member Morgan Wiley has also spent time in Hercules and Love Affair and is also currently in Midnight Magic, and the Tippy Toes jam is a similar type of nu-disco to those projects. Tippy Toes play a local show on March 23 at Cameo with Something In Spanish. Tickets for that show are on sale now.

Meanwhile, you can catch Morgan at Cameo even sooner when Midnight Magic plays the Brooklyn venue this Saturday (3/16). And to bring things full circle, Kim Ann Foxman of Hercules and Love Affair will open the show. Tickets for that one are on sale now too.