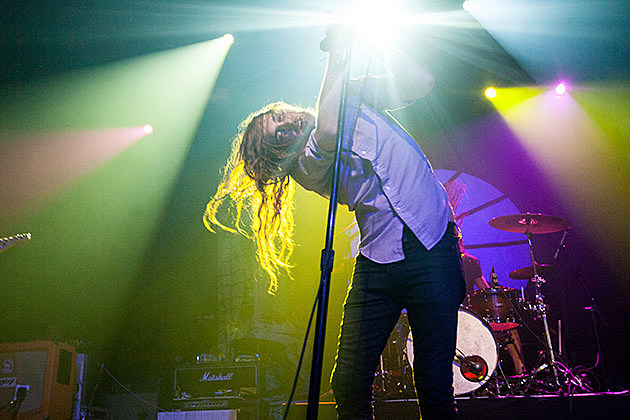 Title Fight and Pianos Become the Teeth are both forward-thinking post-hardcore bands who share a big portion of each other's fanbases, toured together as recently as last year, and are sort of labelmates (PBTT is on Epitaph and TF is on Epitaph's sister label ANTI-). As 2015 comes to a close, both bands have given us lists of their favorite albums of the year.

Title Fight's is from bassist/vocalist Ned Russin, and it's pretty unique. It has their recent tourmate Alex G's album Beach Music, a live on KXLU set from hardcore band Fury (whose EP was on Ned's list last year), a Kelefa Sanneh article from The New Yorker, and more.

PBTT's list is from the whole band (except drummer David Haik, who didn't contribute), with each member offering up two choices and writing some commentary too.

As for their own releases, Pianos put out a 7" this year and TF released their latest full length, Hyperview. Check out both lists below...

Jonathan Franzen "Purity"
Youthcore Issue #1
Kelefa Sanneh "The Best Defense: Money and Morals in the Fight of the Century" in The New Yorker

1. Drake - If You're Reading This It's Too Late - I feel like this was Drake at his most refined. The aesthetic of the art down to the atmosphere and minimalism of the music accompanying his lyrics were what kept me listening to this record more than anything else that came out this year. (Mike)

2. Turnover - Peripheral Vision - We were lucky enough to go on tour with these guys and I was enamored with them every night. There is this feeling they were able to capture on this record and so easily pulled it off live. The songs are so catchy and the music is somber yet somewhat uplifting and dreamy. I couldn't get enough of this album. (Mike)

3. Chris Stapleton - Traveler - This record is an absolute perfect country album. From the tone of the guitars to the subject matter of the lyrics. It rides a fine line of honest heartfelt with enough standard country talk points to make you feel like your listening to an old country classic and an early Lucero record at the same time. (Zac)

4. Royal Headache - High - In October I heard this record for the first time on tour in Europe and was instantly hooked. I'm sure it will be on a lot of lists and it's well deserved. (Zac)

To be honest, my top two artists this year are Kendrick Lamar and Father John Misty. But since you will see both mentioned on most end of year list's here's a couple of different records that I enjoyed. (Chad):

This was my go to record for late night van drives in 2015. Jesso Jr. plays simplistic piano-driven pop songs with vocals that straddle the line between melancholy and hope. He just co-wrote a song with Adele so congratulations to him. It's nice to see an artist I respect get their dues. (Chad)

6. The Sidekicks - Runners in the Nerved World

This album was released back in January and the lead off single Jesus Chris Supermalls is still stuck in my head. I love the lyrical wit and vocal melodies on this record. I was lucky enough to catch the end of their FEST set this year and they are great live as well. (Chad)

This is the first semi heavy record that has really stuck with me in a while. I love the tone of the record. Really moody and simple in a no frills kind of way, both lyrically and musically, and it delivers the point really well. This record definitely puts me in a mood.
(Kyle)

Death Cab is one of those bands for me. I'll always check out their new material and I'm just a sucker for them. Though I like most of their output, this record really took me back and I couldn't stop listening to it.
(Kyle)