Title Fight at Europa in 2012 (more by Rebecca Reed) 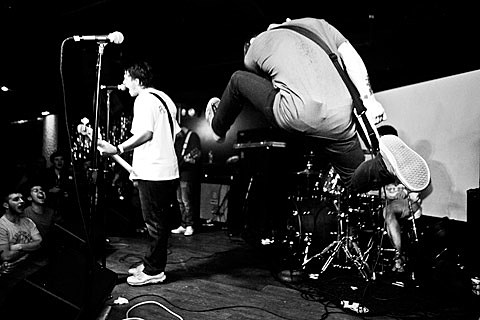 Fun Fun Fun Fest (minus Death Grips) is about to return to Austin, November 8-10 to be exact, and if you'll be down there for it, be sure to keep the fun fun fun going at night with the official FFF Nites shows. The shows are all free with a FFF Fest badge, and highlights include Kurt Vile at Mohawk, OBN IIIs/Blind Shake at Red 7, Subhumans/White Lung at Mohawk, Mac DeMarco/Quasi at North Door, Chelsea Light Moving/Lemuria/Merchandise/The Young at Red 7, Pelican/True Widow/Coliseum at Red 7, Del the Funky Homosapien/Flatbush Zombies at The Belmont, The Men at North Door, Cro-Mags/Ceremony at Holy Mountain, Retox/Narrows/Regents/Coliseum at Holy Mountain, Defeater at Holy Mountain, and Bonobo (DJ) at The Parish. Check out the full schedule here.

As we just mentioned, our metal blog Invisible Oranges is presenting one on Saturday (11/9) of the fest at Hotel Vegas with Black Tusk, Inter Arma, Yakuza, and Eagle Claw. That show doubles as the Austin stop on the Black Tusk/Inter Arma tour, which hits NYC on October 30 at Saint Vitus with Descender and No Way (tickets).

BrooklynVegan is also presenting a FFF Nites show on the Thursday (11/7) night before the festival begins, at Holy Mountain. The show kicks off with two local Austin bands: the metallic Pushmen (10:15 PM) and the proggy Boyfrndz (11 PM), and they'll be followed by post-hardcore noisemakers Code Orange Kids (midnight), and finally the emotionally-charged, boundary-pushing punk band Title Fight (1 AM).

Title Fight contributed the previously-unreleased song "Another One" to the new Will Yip compilation (stream it below), and they've also got a new EP, Spring Songs (which was recorded completely analog), coming out right after FFF (11/12) via Revelation Records.

Code Orange Kids have been touring maniacs lately, having just played NYC at The Studio at Webster Hall last night (10/24) with Power Trip, Counterparts, Terror, and more; and are set to return for a sold-out show at Saint Vitus (12/18) with Every Time I Die.

Stream that Title Fight song below...

Title FIght - "Another One"