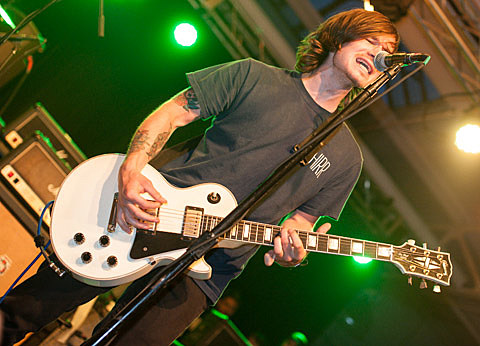 Kingston, PA punks Title Fight have announced they'll release the followup to 2012's Floral Green with a new EP, Spring Songs, on November 12. And in pretty interesting news, the EP is coming out on Revelation Records, the post-hardcore oriented label which celebrated its 25th anniversary last year as is responsible for putting out albums by Youth of Today, Quicksand, Judge, Into Another, Chain of Strength, and more. The first single from the EP, "Be A Toy," is sung by guitarist Jamie Rhoden, who sang some of the more toned-down tracks on Floral Green like "Head in the Ceiling Fan," and this one's in that realm as well. Check it out below (via SPIN).

Title Fight have a tour coming up with Balance and Composure (who we just caught opening for Glassjaw), Portland, ME hardcore kids Cruel Hand, and Bethlehem, PA emo band Slingshot Dakota. No NYC show on that tour, but all dates, including shows in Connecticut, Philly, and Long Island, are listed below.