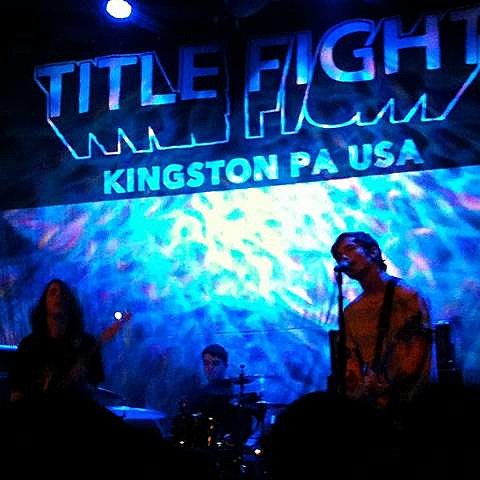 Kingston, PA punks Title Fight came to NYC for a sold out Bowery Ballroom show last night (11/29), the second to last night of their tour with Pianos Become the Teeth, SIngle Mothers, and Tigers Jaw, which wraps up in Philly tonight. The band have done some branching out from the straight ahead punk of their early days on their new record, Floral Green, and that was immediately evident last night, having opened the show with the Hum-esque "Head in the Ceiling Fan." The results of that new album have been great -- they've gained new audiences and if you ask me, Floral Green is by far the best thing the band has done to date.

But new levels of success and a growth in sound haven't tainted the band's young punk spirit a bit. They put every ounce of blood in their body into last night's show and the crowd reciprocated. They churned out rockers like "Secret Society," "Frown," and "Leaf" to raised fists, shout-alongs, and flocks of people rushing the stage. And though I mentioned that I think the new songs are their best yet, when they played older cuts "Symmetry" and "27," the floor opened up and people went apeshit. Naysayers may argue that Title Fight just sound like Hot Water Music and Braid (and they do sound like those bands), but when your music is as genuine and emotionally charged as theirs, it's too hard to ignore.

Baltimore screamo band Pianos Become the Teeth delivered a solid set as usual too, but the openers that impressed me the most were Ontario's Single Mothers. The band have been getting a bit of hype lately for their recently released self titled EP, but despite that, they bashed around on stage without any sense of entitlement. Their frontman (who sounds like a mix of Craig Finn and A-B Life-era Aaron Weiss) kept encouraging the crowd to go as nuts as he and the rest of the band were on stage. And to back his abrasive/flamboyant charisma, the rest of the band packed a huge punch of Dischord/SST post-hardcore n' roll, not unlike another hot new band, METZ.

Videos of Title Fight, Single Mothers, and Pianos Become the Teeth's full sets at their California shows, (via Cavis Tapes) are below.