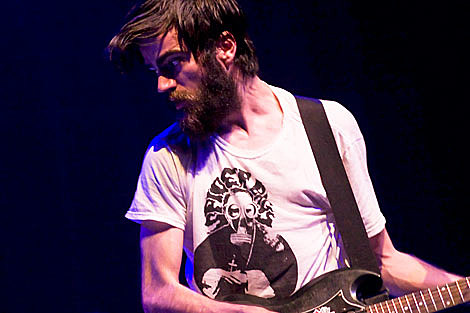 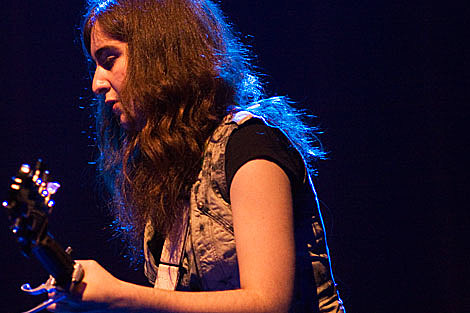 Titus Andronicus have a new record, The Monitor, coming out March 9th on XL. That'll be celebrated with a record release show this Saturday, March 6th at Bowery Ballroom with Parts & Labor, The Babies and Cloud Nothings. Tickets are still on sale.

After that they head out on a record shop in-store tour - the closest that gets to NYC is Fords, NJ's Vintage Vinyl, over the bridge from Staten Island, on March 8th. The tour continues from there ad infinitum, and includes SXSW, where they'll play a few shows. One is the Fucked Up Saves Music showcase on Saturday night at Red 7. Another is the free BrooklynVegan Emo's day party on Wednesday (March 17th), which is also with Fucked Up. Both bands play that Emo's show on the main/outdoor stage with Japandroids, The Black Angels and more TBA. We're also simultaneously hosting the indoor stage with Torche, Withered, Landmine Marathon, Salome, Dark Castle, Javelina and The Atlas Moth.

The NYC-area shows on Titus Andronicus's post-SXSW tour happen on April 11th (Men Can Stop Rape Benefit @ Red Hook High School), April 13th (Rodrigues Coffee House @ Fordham University) and April 14th (at SUNY Purchase Student Center). Those last two (and others) are with the Babies. Let's Wrestle, who you can catch at Knitting Factory on March 15th, opens another leg of the tour through the South and West Coast. Titus ends the tour on April 24th with a show at Maxwell's with Harlem (tickets still on sale).

The three songs above (two reposted, and the new full-force opener "A More Perfect Union") are from the new record, which features guest appearances by members of "Ponytail, Wye Oak, Vivian Girls, Hold Steady, etc.d and a generous assortment of colorful New Paltz locals [where they recorded the album]." As you can see above, the band also sports new member Amy Klein on guitar and violin. More info on the record, a preview video, tour poster, and all tour dates are below...

The Monitor was recorded during August of 2009, under the watchful eye of producer and engineer Kevin McMahon (who oversaw our first album, as well as Pussy Cats by the Walkmen, Son of the Tiger by the Big Sleep, and Promises Promises by Die! Die! Die! among others), at his studio - Marcata Recording - in New Paltz, NY. The usual suspects from the world of Titus Andronicus were all in attendance, as well as an all-star cast of luminous friends (members of Ponytail, Wye Oak, Vivian Girls, Hold Steady, etc.) and a generous assortment of colorful New Paltz locals. The aforementioned Kevin McMahon also did the mixing during September and October, and Greg Calbi did the mastering (so chosen because he is the only person alive who can claim involvement in both The Chemistry of Common Life by Fucked Up and Bat Out of Hell II: Back Into Hell by Meat Loaf) in early November. [Patrick from Titus]