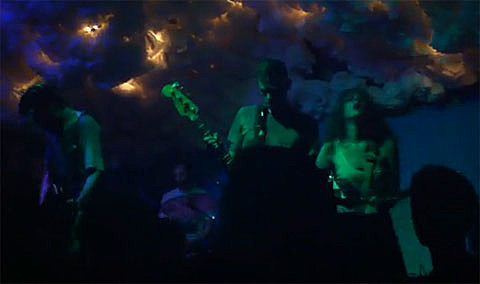 "For starters, [Titus Andronicus] looked like drowned rats by the time they hit "Arms Against Atrophy," just four songs in. At previous shows I was never sure whether or not Glasslands had air conditioning, but Glasslands definitely does not have air conditioning. Between Titus' cult following forming their requisite mosh pit up front and being in such a small venue for a band playing Webster Hall next month, the heat in that place was inescapable last night. Suffocating, almost. Everyone was very, very wet. The show, partly because of the heat I imagine, and partly because the cause, took on "an intimate show among friends with songs that haven't been played in a while" feel. They had to slow things down every so often, or they probably would have died. And so the calmer moments on songs like "No Future, Pt. 1" were even quieter; the silent pause before "No Future Part Three: Escape From No Future" turns noisy was even more dramatic; the outro to "Four Score and Seven" extended into an ethereal ambiance, and "And Ever" was like a modern-day "Piano Man." To make up for it, the louder material was more urgent, more epic." [L Magazine]

Check out the you'll-wish-you-were-there-hot-or-not video from the show below.

Check out Titus Andronicus again tonight at Maxwell's (if you have a ticket because it's sold out) where they kick off their tour with Free Energy. If you don't have a ticket, you can still get one for the September 25th show at Webster Hall where Free Energy is also opening (they kept that part a secret at first).